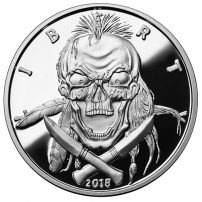 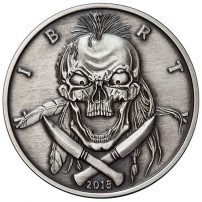 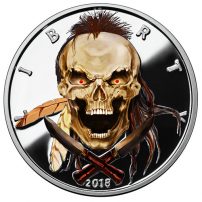 When indigenous tribes were left with no choice but to fight back against the westward expansion of America or battled along the southern border regions with Mexico, it was the Indian Brave who would carry the fight to the other side. The Indian Brave is the fifth silver round in the American Western Skulls Collection and is the second design reminiscent of a character from feature films.

The Indian Brave Round Design

In the fifth release, the American Western Skulls Collection focuses on the warriors who defended indigenous tribes against outlaws and fought for the continued freedom of the tribes against the expansion of the United States. The design features a skull with a Mohawk hairstyle and flaming eyes that symbolize his fiery determination to defend what belongs to his people. The word “Liberty” is engraved above, with “2018” engraved below. For the crossed weapons of this design, the Indian Brave has a pair of deadly knives.

Indian Braves were often inaccurately depicted in American folklore as blood-thirsty warriors who would kill without a second thought. In reality, the men known as braves to indigenous tribes were typically very skilled hunters and would meet violence with violence only in the face of unwarranted aggression. If you look closely enough at this design, you may notice that it resembles in appearance the character of “Magua” from the feature film The Last of the Mohicans.

Round Options for the Indian Brave

When you buy silver rounds with the Indian Brave design, you’ll find all the same options awaiting you that come in the other American Western Skulls Collection releases. The Indian Brave is available in 1 oz silver with proof, antique, and colorized options. It is also available in 5 oz silver with proof, antique, and colorized choices. The colorized rounds feature a layer of colorized lacquer on the obverse character design only, with the Indian Brave featuring auburn-brown hair and two multi-colored feathers woven into his long hair in the back. Each one has an edge-lettered serial number with an included Certificate of Authenticity. The rounds are shipped inside of protective capsules.

The American Western Skulls Collection is produced by the Osborne Mint of Cincinnati, Ohio. The Osborne Mint is widely known as the oldest operating private mint in the United States. The company can trace its roots back to the 1830s.

All options for the Indian Brave release are available from JM Bullion. If you have questions or encounter any problems while purchasing, don’t hesitate to reach out to our customer service team. You can connect with us on the phone at 800-276-6508, chat with us live online, or email us directly.