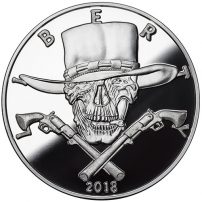 The American Western Skulls Collection from Osborne Mint has proven immensely popular through its first two releases, with both the Indian Chief and Old Sheriff designs from the mint moving quickly following issue. Right now, the 1 oz Proof American Western Skulls Gunslinger Silver Round is available for purchase from JM Bullion as the third issue in this collection! Ro... Read More

The American Western Skulls Collection of silver rounds from Osborne Mint lifts the veil of romanticism that has often clouded the reality of America’s Old West time period. The designs in this series feature six different characters from the era, each one depicted in the form they all ended up in: skeleton. Right now, 5 oz Proof American Western Skulls Gunslinger Silver... Read More 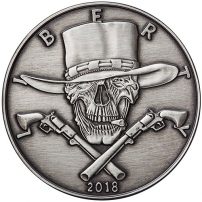 The American Western Skulls Collection of silver rounds has shot to popularity quickly through its first two designs. The Indian Chief captured collector attention, and the Old Sheriff built upon that success. A third design in the planned six-round series is now available in the form of the Gunslinger design. Today, 5 oz Antique American Western Skulls Gunslinger Silver R... Read More 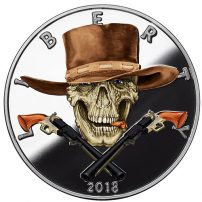 One of the most controversial figures from America’s Wild West era was the gunslinger. At times a force for good, but all-too-quick to pull a gun for evil reasons, gunslingers roamed the vast expanses of the west looking for opportunity. The 5 oz Colorized Proof American Western Skulls Gunslinger Silver Round is currently available to you for purchase online from JM Bull... Read More

Test Your Luck with the Gunslinger Round – American Western Skulls Collection

The American Western Skulls Collection features a variety of character designs that Americans are familiar with from Hollywood films and TV series that date back almost a century. From the moment the Wild West Era came to a close in the early 20th century, Hollywood set about memorializing the often-violent era. Today, those buying silver online can add some Wild West flair to their collection with the silver rounds from the American Western Skulls Collection. If you already own the Old Sheriff, don’t forget to purchase his nemesis in the form of the Gunslinger.

The Gunslinger – Are You Feeling Lucky?

The perfect companion, or should we say arch-enemy, to the Old Sheriff round in this series is the Gunslinger round. If you look closely at the design of the skeletal figure in this release, you might notice a slight resemblance to an American actor who made his name portraying outlaws and lawmen alike in American films. The Gunslinger has a wry smile on his face with an eye patch over one of his eye sockets. He wears a distinct hat and chomps at the bit on the remaining butt of a cigar as he sizes you up for the draw.

All Gunslinger rounds feature the engraving of “Liberty” above the figure and a year of issue as “2018” below. The crossed weapons displayed in this particular release are a pair of six-shooter pistols. The repeating pistol was one of the weapons which helped tame the Wild West, delivering repeating fire and greater accuracy when compared to the old flintlock pistols of the 18th century.

The Role of Gunslingers

There was no character in the Wild West that was more troubled and complex than the gunslinger. Some of these men were people of good moral standing who resorted to violence only in the interest of protecting those they loved or other innocent people. Meanwhile, other gunslingers were available to either side depending upon who would pay the highest price for their services. Of course, plenty of Wild West gunslingers were outlaws using the vast stretches of the American West to hideout from the law and carve out a fortune for themselves at whatever cost.

Options for the Gunslinger Release

All of the silver rounds for sale in the American Western Skulls Collection are offered in six different options. The initial release of all the rounds included proof, antique, and colorized 1 oz silver rounds and proof and antique 5 oz silver rounds. More recently, Osborne Mint has added a 5 oz colorized round to the series. The colorized design of the Gunslinger is simple and muted in its colors. His cowboy hat is brown, as are his cigar butt and the handles of his pistols. Each round has its own, unique serial number engraved on the outer rim, ships in a protective capsule, and features a Certificate of Authenticity.

Get Your Gunslingers from JM Bullion

Please don’t hesitate to contact our customer service team with questions about the Gunslinger design or the entire American Western Skulls Collection. You can contact us on the phone at 800-276-6508, chat with us live online, or simply send us an email with your inquiries.