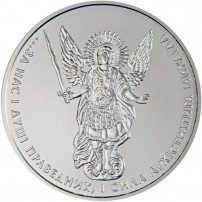 There’s a brand-new coin series garnering increased attention on the European continent right now, and it doesn’t come from one the countries you might expect. While programs from Britain, Austria, and Armenia have long been available to buyers across Europe and around the world as reliable bullion options, a relatively new offering from the National Bank of Ukraine is catching the eye of both investors and collectors.

The Ukrainian Archangel Michael series of silver and gold coins debuted in 2011, and has quickly expanded in size and increased in diversity as more numismatists discover this relative newcomer in the marketplace. Learn more about the Archangel Michael series below, including the Ukrainian Silver Coins in this collection which are now available to purchase from JM Bullion.

All Ukrainian Silver Coins from the Archangel Michael collection are produced by the National Bank of Ukraine, which has the dual role of producing the nation’s currency and implementing its monetary policy, as well as striking bullion coins for investment purposes. Located in the national capital city of Kiev, the National Bank of Ukraine was formed in 1992 following the fall and separate of the states within the Soviet Union. Originally serving as a central bank for the region during Soviet occupation, the bank today serves the independent Ukrainian government in the production of paper currency and coinage for circulation, as well as commemorative precious metals.

Like many other silver bullion coin programs available to modern investors, there is only one weight struck in these Ukrainian Silver Coins. The Archangel Michael coin program features silver and gold bullion options. All coins in the program are available to date only as BU products. Coins in BU condition show no signs of wear and tear, though you may notice minor flaws including breaks in the luster, spotted surfaces, or contact marks from the production process at the mint.

Who is the Archangel Michael?

The Archangel Michael is known to the people of all the major religions of the world. Christians, Jews, and Islamists alike know him as a healer of the sick and the leader of God’s army. The story of Michael the archangel is one of the most powerful in the Christian bible. Known as one of God’s greatest warriors, Michael did nothing less than save heaven itself as the defender of God’s people and the kingdom of heaven by defeating an enemy simultaneously referred to as a dragon, Satan, or the devil.

Michael has been depicted in various reliefs throughout human history. However, there is one portrayal of the Archangel Michael that seems to be pervasive throughout various cultures and religions. The primary depiction used around the Western world shows Michael in a full suit of Roman armor and wielding a flaming sword in his right hand. His figure is often surrounded by a pair of bird-like wings that emanate from his back and the rays of the sun expanding from the background behind his relief. For the Ukrainian Silver Archangel Michael Coin, the image of Michael employs another common design feature of his image, that of Michael standing above a dragon with his sword at hand ready to slay the beast.

On the reverse of all Ukrainian Silver Archangel Michael coins you’ll find the coat of arms of Ukraine in the center of the design field. It is surrounded by engravings that are all in the native Cyrillic language, with “National Bank of Ukraine” located above the design set and outside of the octagonal cartouche that frames the coat of arms.

On the shield of the coat of arms there is the emblem of the National Bank of Ukraine, a pair of griffins with the hryvnia symbol (Ukrainian monetary weight) between the beasts. The symbolism is meant to represent the beasts as guardians of the nation’s gold reserves. You’ll also find the face value, year of issue, metal content, weight, and purity on this face in Cyrillic as well.

Other Coins in the Collection

Ukrainian Gold Archangel Michael coins available from JM Bullion have been in production at the National Bank of Ukraine as well since 2011. Mintage of these Ukrainian Gold Coins has never surpassed 10,000 coins in any one year for any given weight individually. Collectively, the gold coins have surpassed 20,000 coins in total in recent years, but individual coins are often priced at a point such that most investors cannot afford the coins and the mintage figures remain quite low as a result of low demand.

Ukrainian Gold Archangel Michael coin production expanded immediately in 2012 with the addition of a ½ oz coin and 1/10 oz coin to the gold program. During each subsequent year of production, the 1/10 oz Ukrainian Gold Archangel Michael Coin has been the top seller individually among the gold coins, surpassed only once by the 1 oz coin in 2014. In recent years, the ¼ oz gold coin has gained traction, as well as a popular option among investors.

Features of the Ukrainian Gold Archangel Michael Coins include:

JMBullion.com accepts a variety of payment methods for your purchase of Ukrainian Silver Coins. You can pay for your brand new Ukrainian Silver Coins using a major credit/debit card, with an average processing time of one business day. We also accept paper checks and ACH, with a four to six business day processing time, and bank wire and PayPal transfers. The latter two forms of payment process immediately, while bank wire and paper check and ACH payments qualify for a 4% discount on the purchase price.

We offer an affordable, tiered shipping price that is dependent upon your overall purchase amount. If your purchase exceeds $199, you qualify for free standard shipping and insurance. If you would like expedited shipping, it is available at an extra charge. All JMBullion.com products ship via the United States Postal Service or UPS.

If you have any questions, please feel free to reach out to us at JMBullion.com. Our associates are available on the phone at 888-989-7223, online using our live web chat, and via email.