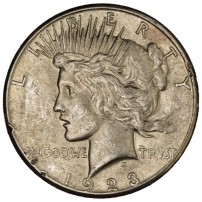 Peace Silver Dollar Coin (Cull)
As Low As:
In Stock 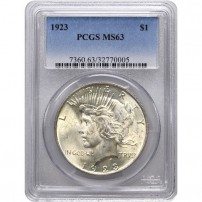 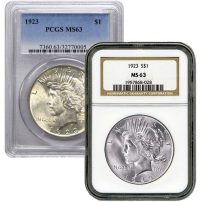 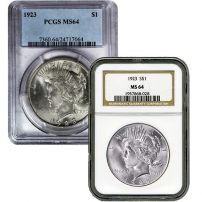 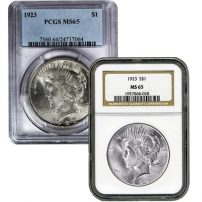 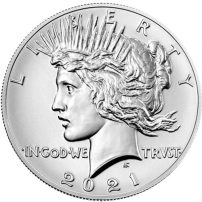 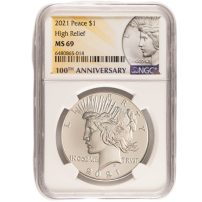 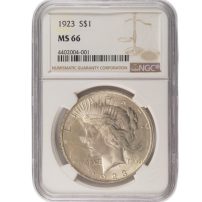 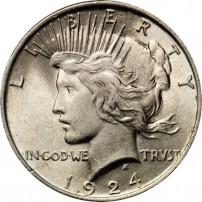 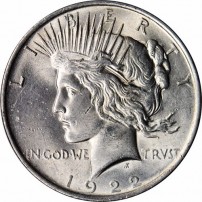 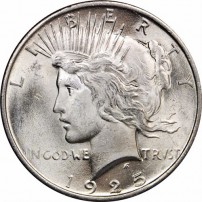 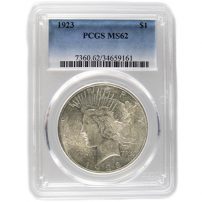 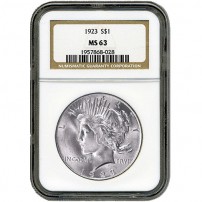 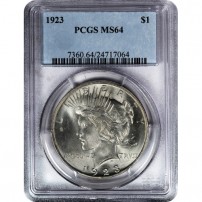 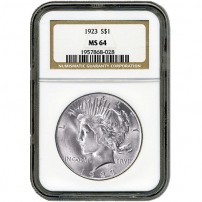 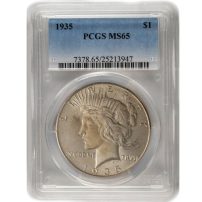 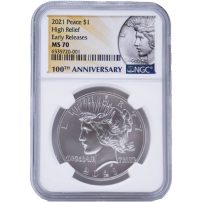 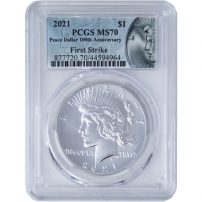 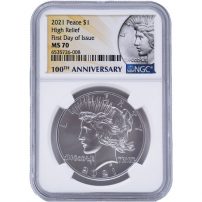 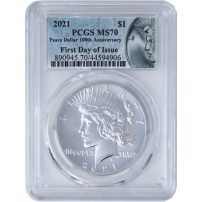 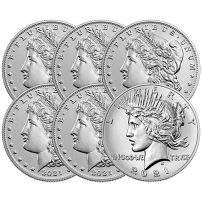 The U.S. Peace silver dollar is valuable to both collectors and investors for its precious metal composition and place in American history. These coins were circulated in the United States off and on from 1921 to 1935. Though the Peace Dollar is often overshadowed by its predecessor, the Morgan Dollar, it is still considered a beautiful piece of American minting history and is also made from 90% silver.

An act of Congress passed in 1878 required the federal government to buy at least two million dollars in domestic silver every month to create dollar coins. These coins, termed “”Morgan dollars”” for their designer, didn’t last long in circulation as banks snatched them up to back U.S. paper currency. The United States stopped making these coins in 1904. Later, in 1918, the United States melted down nearly 300 million silver dollars and sold them as bars to the British to help their war-funding against Germany.

Because the government melted almost half of all Morgan dollars to sell to the British, federal law required the U.S. Treasury to create new silver coins to replace them. Just as before, the federal government could only buy silver mined from veins within the country for striking new coinage.

The Peace Silver Dollar Is Born

In 1920, an essay presented by Farran Zerbe at the American Numismatic Association’s convention in Chicago sparked national interest in a coin to commemorate the hard-won peace of World War I. Dubbed the “”Peace Coin,”” the idea carried all the way to Congress where a failed bill to commission the coin’s striking led the U.S. Commission of Fine Arts to take up the cause.

The Commission, together with the U.S. Mint, created a contest whereby invited sculptors would send their designs for the new coin. The winner was to receive $1,500. Since the Morgan dollars were in production for less than 25 years, no act of Congress was necessary to order the new silver dollar’s striking. All they needed was the direct order of the Secretary of the Treasury.

Contest rules dictated that the sculptors should depict Liberty’s head on the obverse side of the coin and an eagle on the reverse side. To qualify as legal tender, the coin needed to carry the country’s name, the coin’s denomination, and several other phrases, including “”E Pluribus Unum.””

Anthony de Francisci’s design garnered unanimous approval from the judges. The contest’s youngest entrant, de Francisci crafted a design that featured an image of his wife Teresa as Lady Liberty on the coin’s obverse side. His reverse sides design depicted an eagle clutching an olive branch in one and an eagle breaking an unsheathed sword in the other. The Commission opted to join both images into the last design. The move sparked large public outcry with several reporters noting that the broken sword sent the wrong message with its symbolism.

The U.S. Mint, acting with the designer’s approval, removed the broken sword from the design. On December 28, 1921, the Mint struck its first Peace dollars, producing more than one million in the first year’s run. This initial minting continued until 1928 when terms written into the Pittman Act required production to stop. The Mint would create more Peace dollars in 1934 and 1935 under new orders from Congress. Lawmakers would again order creation of Peace dollars in 1964, but no coins from that minting made it into circulation due to artificial value manipulation by collectors.

Value as an Investment

There are finite numbers of Peace dollars available; however, with yearly mintings in the millions, scarcity isn’t always an issue that collectors run into with this particular design. Collecting coins from each production year is relatively simple, given that there are only 24 dates and mintmark options to track down.

The value of the coins, in most cases, comes from the amount of silver used to create them. If the current market price of silver runs high, then the coins will have increased value. The exceptions to this rule apply generally to uncirculated coins and those which are in pristine condition. For example, an uncirculated 1934-S series Peace Dollar will usually have a higher value for collectors due to its rarity in the series and unblemished condition.

1964 D-Series Peace Dollars: No coin from the 1964 D-series of Peace dollars created by the Denver Mint ever made it into private or public hands. Congress acted to melt these coins down after collectors inflated their worth in the days leading up to release. This action is part of the reason the Mint stopped creating true silver dollars. Anyone offering “”authentic”” coins from this series is more than likely peddling forgeries.

Every coin struck by the U.S. Mint has identifying marks that signal the particular facility that created it. Collectors use these markings to find coins from rarer series, which aids in assessing value and overall worth.

Checking for these identifying characteristics is important to make sure that the coins are authentic. Trained professionals should check coins missing any of the aforementioned markings to decide their true value.

Buying coins online gives collectors easy access to roughly 90 percent of silver coins minted in the United States throughout its history. Online retailers can present collectors with a variety of buying options depending on the production year, rarity, and condition of their offerings. You want to buy coins as close to “”about uncirculated”” as possible, though that gets more difficult with older mintings that made it into circulation. Mint state coins (100 percent design visible with luster) may confer the highest value.

The Peace Dollar harkens to a time where the United States sacrificed a great deal to stem the tide of worldwide aggression. The nation wanted to heal, and this coin provided a focal point for its recovery. Collecting these coins combines the aims of a collector with the passionate love of a historian. Be sure to browse our full selection of Peace Silver Dollars which are available from different years and in varying degrees of condition.

Please feel free to contact us at JM Bullion with any questions you have regarding silver. You can call us on the phone at 800-276-6508, chat with us live online, or simply send us an email with your inquiries. For questions regarding payment options or applicable minimums, we encourage you to visit our Payment Methods FAQ page first for quick answers to common questions. You can always contact us for further clarification regarding payments.