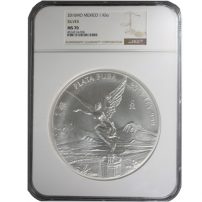 The Mexican Silver Libertad is one of the most valuable silver bullion programs in the world today. Although it is easily overshadowed by the sovereign coins from its neighboring North American sovereign mints, the Mexican Mint’s primary product is gaining popularity in the modern era for its diversity.

Silver Libertads have a number of differences from their competing brethren in North America. For example, look at the proof version of the popular coin program. While fewer than 10,000 Proof Mexican Silver Libertads were struck and sold across all seven weights in 2015, the United States Mint sold in excess of 750,000 Proof American Silver Eagle coins in 2015, and those are only available in the 1 oz weight.

Additionally, those same Proof Mexican Silver Libertads are available in a wider array of weights than its neighboring competitors. As mentioned, the Proof American Silver Eagle is available only in 1 oz, while the Royal Canadian Mint’s Canadian Silver Maple Leaf is also available in just a 1 oz variety, but does feature a number of privy mark designs that add uniqueness to the lineup.

From time to time, JM Bullion stocks Graded Mexican Silver Libertad coins. These products have a higher value assigned to them because of the certification process that verifies the quality and visual brilliance of each coin. This certification process is conducted by either the Numismatic Guaranty Corporation or Professional Coin Grading Service, the world’s two largest and most respected grading companies.

Graded Mexican Silver Libertads, also known as certified coins, have numeric values and additional designations added that raise the value of the coins beyond the simple finished product from the Mexican Mint. The grading process is complex at times, but the following paragraphs offer an overview of how both certification companies handle the grading of these, and other, popular coins.

When you see NGC Certified Mexican Silver Libertads in the JM Bullion catalog, you are viewing and considering for purchase coins that have gone through an extensive and highly regarding grading process. There is a general three-step process included in the NGC grading process, and are broken down into the following categories:

The PCGS use of the Sheldon Scale in assigning grades to PCGS Certified American Silver Eagles and other coins helps investors and collectors rest assured that the coins they are purchase meet the standards and grading requirements of a coin of that particular grade. The PCGS stands behind its certifications, offering the following guarantee on its website:

“The PCGS Guarantee of Grade and Authenticity is fundamental to our concept of third-party grading. The cash-back policy ensures the accuracy of the grade assigned to any PCGS coin as long as it remains in its tamper-evident holder. As the owner of a PCGS-graded coin, the customer will have the benefit of PCGS’s Guarantee of Grading Accuracy and Authenticity and each PCGS Authorized Dealer will accept the grades assigned to the coins by PCGS.”

In order to ensure that the coins PCGS Certified American Silver Eagle coins you purchase arrive in their promised condition, the PCGS encapsulates all coins it certifies inside of protective plastic slabs that not only protect the coin from damage, but preserve it for decades to come.

Background on the Sheldon Numeric Scale

Prior to the formation of the PCGS and NGC, market participants were forced to assess the value of rare coins using divergent definitions of what precisely qualified as valuable. It was generally agreed upon that physical condition, or grade, of the coin was important to the value. However, there was not a universal system for grading or even a universal standard that could be applied. Prior to the 1980s, rare coin collectors had only three broad categories to place coins into based upon their condition. These included:

The problem that was created by this system of definitions is that collectors and dealers eventually realized that some Fine coins, for example, were finer than others. In 1948, renowned numismatist Dr. William Sheldon had developed a scale for assigning grades between 1 and 70 to coins. In theory, his Sheldon Scale posited that a grade 70 coin was worth 70 times the value of a grade 1.

In refining the Sheldon Scale and applying it to modern Graded Mexican Silver Libertad coins, and others, the PCGS and NGC found that many buyers were often taken advantage of because of the difficulty in telling the difference between coins of the same category. For example, a Mint State 65 coin has a market value (in most cases) that is greater than the same coin with a Mint State 64 coin, but the differences are nearly undetectable by an untrained eye.

Today, both the PCGS and NGC use the 1 to 70 Sheldon Scale to certify the condition of all coins it grades. Each grade starts with a strike type, which includes the following options:

As just touched upon above, the PCGS and NGC use a variety of terms to explain the specific condition of an individual coin. In the following sections we’ll offer a breakdown of those common terms for each of the grading houses. First up are those terms commonly assigned to Graded Mexican Silver Libertads by the NGC:

The following are the terms used by the PCGS, most of which have similar definitions but for the sake of differentiation, there are variations in the specific terms used:

It wasn’t until 2000 that the coin series received an update to its image sets. The design did not change drastically, but rather, was refined to meet the standards and expectations of modern investors and collectors. On the obverse, Winged Victory was now featured atop a pillar to more accurately depict the statue of the Angel of Independence that was erected in Mexico City during the centennial independence celebrations of 1921. In the background, the twin volcanic peaks of Popocatepetl and Iztaccihuatl were given greater prominence. On the Centenario, these volcanic peaks were smaller and drowned out by the size of Winged Victory. A slimmer Winged Victory is still central in the design, but greater detail and prominence is given to the volcanoes.

There is no longer an engraving of the face value on the Libertad coins. The date mark for independence has also been removed from the Libertad, but the weight, metal content, and purity of the coins is still featured on this side, along with the year of minting.

When Spain completed its conquest of the Aztec Empire in 1521, the Spanish crown set about the task of establishing a colonial empire in the Western Hemisphere. One of the first orders of business, establishing the first mint in the Americas to process the gold and silver found throughout the region.

The modern Mexican Mint is located in Mexico City, the national capital of Mexico. In 1535, Viceroy Antonio de Mendoza arrived in what was then called New Spain to assume control of the territory of New Spain from the capital of Mexico City. The colony of New Spain not only included all of Mexico and most of Central America, but also Cuba, Haiti, the Dominican Republic, Puerto Rico, Jamaica, the Cayman Islands, Trinidad, the Bay Islands, and the Philippine Island.

Originally, the Mexican Mint produced coinage that was used throughout the territories of New Spain, and its products were not only used in other regions of North and South America, but even served as the basis of future monetary programs such as the U.S. dollar, Japanese Yen, and Chinese Yuan. Since 1925, Banco de Mexico (the nation’s central bank) has controlled the minting of coins and printing of banknotes handled by the Mexican Mint.

JMBullion.com accepts a variety of payment methods for your purchase of Mexican Mint bullion. You can pay for your Mexican Mint bullion using a major credit/debit card, with an average processing time of one business day. We also accept paper checks and ACH, with a four to six business day processing time, and bank wire and PayPal transfers. The latter two forms of payment process immediately, while bank wire and paper check and ACH payments qualify for a 4% discount on the purchase price.

We offer an affordable, tiered shipping price that is dependent upon your overall purchase amount. If your purchase exceeds $199, you qualify for free standard shipping and insurance. If you would like expedited shipping, it is available at an extra charge. All JMBullion.com products ship via the United States Postal Service or UPS.

If you have any questions, please feel free to reach out to us at JMBullion.com. Our associates are available on the phone at 888-989-7223, online using our live web chat, and via email.