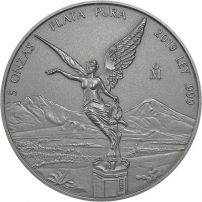 Already one of the most diverse silver coin programs in the world, the Mexican Silver Libertad now offers investors and collectors even more to choose from as of its 2018 release schedule. The Silver Libertads from the Mexican Mint debuted in 1982 and have now become one of the most extensive collections with bullion uncirculated, proof, reverse proof, proof-like, and antique silver coins for sale. Read on to learn more about the newest coin in this product lineup.

In 2018, the Mexican Mint added a fifth option to its popular Silver Libertad Series. The new Antique Mexican Silver Libertad debuted with 1 oz, 2 oz, and 5 oz silver options for collectors. The set had a unique launch with 40,000 coins produced in the 1 oz weight. This was due in large part to perceived interest and a massive dealer order for the new coin. The 2 oz and 5 oz coins had mintages typical of the Mexican Mint at just 2,000 coins each. In that first year, all three weights sold out their total mintage at the mint.

The 2019 release of the Antique Silver Libertad came with the same three weights available. This time, the Mexican Mint offered mintage figures more in-line with its own production approach and that of a typical antique coin release. Each of the weights had a mintage of just 1,000 coins.

The obverse of all Antique Mexican Silver Libertad coins features the modern coat of arms for Mexico in the center of the design field. The official seal includes a Mexican golden eagle on a cactus arm as it uses its beak and talons to control a serpent. “Estados Unidos Mexicanos” is inscribed above the seal and wreath frames it below. Around the outer design field, there are 10 historical versions of the national coat of arms.

On the reverse side of the Antique Mexican Silver Libertad coins is the image of Winged Victory. Her figure is inspired by Victoria, the Roman goddess of victory from Ancient Roman mythology. Victoria is traditionally depicted with a wreath crown held up in one hand. The design used on Mexican coinage, and as featured atop the Mexican Independence Victory Column, is unique to the nation of Mexico. The design includes the wreath crown in one hand with a set of broken chains in the other. The broken chains symbolize the nation’s break from Spanish colonial control following victory in its war for independence against Spain.

Antique Mexican Silver Libertad coins are the fifth version of the coin introduced. The series began in 1982 with a 1 oz silver BU coin as the only available option. The 2 oz and 5 oz weights were introduced into that collection in 1996. Proof Silver Libertads entered regular production in 1986 with a 1 oz coin and gained 2 oz and 5 oz options in 1996 as well. More recent introductions in the series include the 2002 debut of 1 Kilo proof-like coins and the 2015 release of reverse proofs. The reverse proof collection started with a 1 oz coin and gained 2 oz and 5 oz weights in 2017. The Antique Mexican Silver Libertad’s 2018 introduction came with all three weights (1 oz, 2 oz, and 5 oz) available at once.

Get Your Antique Mexican Silver Libertad Coins at JM Bullion

The beautiful coins of the Antique Silver Libertad Series are now available to purchase from JM Bullion. If you have any questions about this new series, you can call us on the phone at 800-276-6508, chat with us live online, or email us directly.