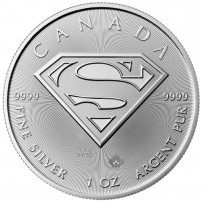 Superheroes are on everyone’s mind right now, from feature-film lovers to precious metal collectors. The Royal Canadian Mint has led the way in 2016 with a variety of superhero-themed coins, many focusing on the recently released Batman vs. Superman: Dawn of Justice film. Today, a new product from the RCM commemorates Superman with an iconic depiction of his “S” shield. Coin Highlights: Mintage capped at 1 million coins in total! ... Read More

Coin collectors have had a lot to celebrate in 2016, especially if their interests crossover into the field of graphic novels. Comic book revivals have been taking place on the big screen in recent years, with Hollywood bringing many of the world’s most beloved action superheroes to life in feature films. Now, sovereign mints around the globe are getting in on the act with silver proof coins featuring brilliant designs.

Among the leaders in this category is the Royal Canadian Mint, which released a four-coin series of silver colorized proof coins to coincide with the release of the feature film Batman v. Superman: Dawn of Justice. The move may have come under intense scrutiny for its storyline, but numismatists have quickly snatched up the Batman v. Superman Dawn of Justice coins available from the Royal Canadian Mint. Learn all about these coins below.

The first release in the exciting new series of silver coins, this coin depicts the perfect combination of both Batman and Superman’s logos, with the iconic “S” visible in the center of the bat logo. On the reverse face of the coin is an engraving that combines the two logos in the center, with the face value engraved above and the year of issue below. The so-called “shattered glass” design combines matte finishes and hints of a mirrored finish to achieve the visual appearance.

The Man of Steel. Fasting than a speeding bullet and capable of leaping tall buildings in a single bound flies off the surface of the second coin in this series. Featured alone in his traditional blue-and-red superhero outfit, Superman comes to life on this brilliant colorized silver coin. The world’s first superhero appeared in 1938 and makes his return on the reverse of this coin standing tall and strong with his cape blowing in the wind. The background features the shattered glass design first introduced on these Dawn of Justice coins. Included in the background is the Kryptonian syllabic writing system created by Canadian linguist Dr. Christine Schreyer.

The Caped Crusader is one of the most infamous superheroes, depending upon who you ask that is. To some, Batman is a hero who does what must be done to save the people of Gotham City from evil forces. To others, he is a masked vigilante carry out justice that he deems appropriate. The reverse side of the coin features a contrasting set of polygon shapes, with a matte finish, that give the appearance of shattered glass for the background. Batman is finished with a black coating, bringing him to life in a colorized image. Engravings on this side include the coin’s face value, year of issue, and Batman’s name in the Kryptonian syllabic writing system from Canadian linguist Dr. Christine Schreyer.

In the fourth and final release of the series, the most popular female superhero comes to life to close out the series. On the reverse of this coin is the colorized image of Wonder Woman, in her trademark outfit with her whip at her side. Set against the shattered glass background used on other releases, you’ll find her strength and beauty unparalleled.

Shared Features and Details of the Batman v. Superman Dawn of Justice Coins

On the obverse face of each coin you’ll find the right-profile portrait of Queen Elizabeth II from Susanna Blunt. Engravings include her name, the phrase “D.G. Regina,” and “Canada.” In addition to this shared obverse design field, the coins have a variety of other commonalities to be aware of, including the following:

The comic universe that includes rival DC superheroes all started with the introduction of one hero: Superman. The world’s first superhero appeared in 1938, and is returning to the big screen to do battle with Batman for the hearts and minds of humans. In the feature film, Batman recognizes that Superman’s power has grown too great, with too much entrusted to one man comes too great a potential for abuse.

As the world’s greatest superheroes focus their wrath on one another, a greater danger to mankind emerges in the background. The question is, will the two come together in time to save humanity or standby as it is all destroyed while they feud?

After Canada earned greater self-governance, the Royal Canadian Mint was formed as the official sovereign mint of the nation. The original facility in Ottawa remained the lone operating sovereign mint through the 1970s. At this point however, demand for precious metal bullion coins pushed capacity to its limit, with official Canadian currency having to be struck at United States Mint locations to compensate. The Winnipeg facility opened in the 1980s to bolster capacity in the Royal Canadian Mint system.

When you shop with JM Bullion, you have a multitude of options for payment methods. We gladly accept credit/debit cards for all purchase from our online catalog. You may also pay for your silver and gold bullion products with a paper check, bank wire transfer, Bitcoin, ACH, or Pay Pal fund transfer.

Paper checks and ACH do take the longest time to clear authorization, averaging four to six business days. Credit and debit card purchases clear in one business day on average, while PayPal and bank wire transactions often clear immediately. These options release your purchases to our fulfillment queue the quickest, allowing us to expedite the process of getting your new precious metal products to your door.

When it comes to delivery, JM Bullion is proud to offer free shipping and insurance on all purchases over $199. Your package will ship in discreet boxes courtesy of the United States Postal Service or UPS. We’ll provide you with a tracking number for your shipment within 24 hours of shipping. Should your package become lost, suffer damage, or prove to be the incorrect items we’ll work with your to correct the issue. JM Bullion’s offer of insurance covers a full refund of your purchase price if your products are lost or damaged. In the event we still have items in stock, we will replace lost or damaged items.

If you have any questions about these amazing silver products from the Royal Canadian Mint, please feel free to reach out to JM Bullion. Our associates are available to you on the phone at 800-276-6508. You can also live chat with us during business hours through our online service or send us an email anytime with your questions.