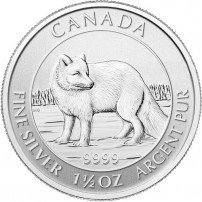 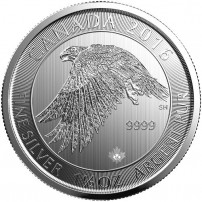 Though not officially recognized as a Canadian Wildlife collection, the coins in the 1 1/2 oz silver range from the Royal Canadian Mint all feature beautiful designs of creatures commonly found throughout the vast Canadian wilderness. These coins share a few common themes, which include the unique format of 1 1/2 Troy oz of .9999 pure silver. When originally released, each of these designs was available inside of individual plastic flips or tubes of 15 coins. Each coin had a face value of $8 (CAD) backed by the federal government of Canada. The designs in this collection included the following (in order of release):

All of the 1 1/2 oz Canadian Silver Coins in this collection feature the same obverse design. On this side of the coins, you’ll find the effigy of Queen Elizabeth II. This is the fourth-generation design on Canadian coinage and just the second image of a monarch in Canadian history created by a Canadian artist. The design was created in 2003 by Susanna Blunt for the Royal Canadian Mint, and is the first since her father King George VI’s to feature a monarch without a crown. This side of the coins include engravings of “Elizabeth II,” “D.G. Regina,” and “8 Dollars.”

The first issue of the collection featured arguably one of the most prominent, well-known species found in Canada. Inhabiting the far northern stretches of the nation in the Arctic Circle, the Polar Bear is one of the largest land mammals alive today and lives off of seals and other animals it can find to eat in the Arctic. This design included a massive polar bear walking on an ice shelf from right to left across the coin design. Above it was an engraving of “Canada,” while below there was “Fine Silver 1 1/2 oz Argent Pur.” The purity of “9999” was also engraved on this side.

For the second issue of a 1 1/2 oz silver coin, the Royal Canadian Mint featured the Arctic Fox species on the reverse. The Arctic Fox is one of the few other mammals, aside from the Polar Bear, capable of surviving in the harsh climate of the Arctic Circle. The animal will burrow into the snow to create a home for itself and feeds on some of the smallest mammals in the region, such as arctic rabbit species. In the design, the Arctic Fox is depicted on the open tundra as some fir trees are visible in the distant background.

Returning to a popular species in wildlife designs, the Royal Canadian Mint featured the polar bear for the second time in the collection of 1 1/2 oz silver coins. This time there is a mother polar bear keeping close tabs on her cub as the pair look for food on the winter tundras. These coins were the first in the series to feature the Royal Canadian Mint’s new laser-engraved radial lines around the outer rim on the reverse side. The obverse field of the coin also has the radial lines to boost anti-counterfeiting measures in Canadian coinage.

The most recent addition to the Royal Canadian Mint’s collection of 1 1/2 oz silver coins is the 2016 1.5 oz Canadian Silver Falcon Coin. Available in Brilliant Uncirculated condition like the other coins of its type, the Silver Falcon Coin depicted a falcon in flight on the coin’s reverse. The radial lines were again used on the outer rim of the reverse and the entire background of the obverse on the 2016 Falcon Coin. These coins had yet another anti-counterfeiting measure added that the Royal Canadian Mint debuted on its Maple Leaf Collection in 2015. In the lower portion of the design field on the reverse is a micro-engraved maple leaf privy mark, which in the center features a year of issue that is visible only under magnification and includes the final two digits only.

You can purchase your Royal Canadian Mint 1 1/2 oz silver coins from JM Bullion with ease. Give us a call at 800-276-6508, chat with us live online, or simply send us an email with your inquiries.