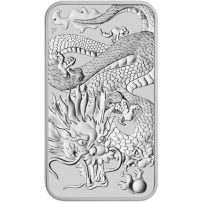 Any quantity available for $8.49 per oz over spot!

One of the more exciting releases of silver bullion from Perth Mint in recent years has been the Rectangular Dragon Series. These beautiful coins are available in BU and Proof specimens with slight variations in the dragon design theme on the reverse with each... Read More 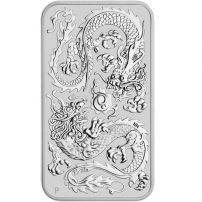 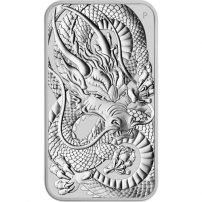 The Chinese dragon is a mythological creature that is legendary across mythology, folklore, and culture at large in Asia. The Chinese dragon is not only associated with the Emperors of old, but with the very founding of the empires of the past and the nation it has become today. Continuing its beautiful rectangular bullion release, the Perth Mint now offers its 2021 design... Read More 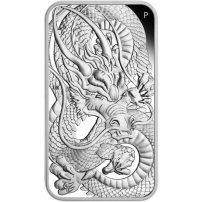 Reach into your pocket for some change and you’ll pull out coins of a familiar shape. Though denominations and nations of issue vary, the vast majority of coins available around the world are circular. Investment-grade bullion coins have largely followed this accepted design as well. The Perth Mint is known as a leader in gold and silver bullion production and is respected for its creative thinking when it comes to coin designs. The Perth Mint is the only mint you’ll find that is also rethinking the shape of silver coinage.

The Perth Mint’s first foray into the production of rectangular silver coins came as part of the Lunar Series II collection. While the Lunar Series II coins are available in silver and gold bullion, each issue in the collection also features proof offerings. The silver and gold versions of these coins each have a different design depicting the creature from a given year on the Chinese lunar calendar. In the case of the rectangular silver coins in this collection, another design alternative is offered with a colorized proof finish.

After finding success with the release of proof rectangular silver coins, the Perth Mint launched the world’s first bullion rectangular coins. Though each one looks like a minted ingot bar, these silver coins were available in a 1 Troy oz weight with .9999 pure silver content and a face value of $1 (AUD) backed by the federal government of Australia as sovereign coinage. The first issue was the 2018 1 oz Australian Rectangular Silver Dragon Coin, available in Brilliant Uncirculated condition.

The coins are available in protective plastic, tubes of 20 coins, or even Monster Boxes of 200 coins. With a limited mintage of 500,000 coins, these new bullion rectangular silver coins featured the dragon of China on the reverse. The dragon’s long body snakes down the length of the coin and features a flaming pearl on the left-hand side of the coin’s design field. There is also a “P” mint mark on the side.

For the obverse of the 2018 Australian Rectangular Dragon Coin is the effigy of Queen Elizabeth II. Her Majesty's effigy featured here is the fourth-generation design available and was created in 1998 for the Royal Mint of England by Ian Rank-Broadley. Engravings on this face of the rectangular silver coin include Her Majesty’s name, the nation of issue, weight, purity, metal content, year of issue, and the face value of the coin.

Founded in 1899 as the third and final Royal Mint facility on the Australian continent, the Perth Mint has outlived its predecessors at the Sydney Mint and Melbourne Mint. Throughout the nation’s federation process in the early 20th century, the Perth Mint operated alongside the Melbourne Mint as defacto sovereign mints. The Currency Act of 1965 established the Royal Australian Mint in the capital district of Canberra, and Britain passed along control of the Perth Mint to the state of Western Australia. Today, the Perth Mint is one of the world’s most respected mint facilities.

If you want to add a unique investment to your portfolio, reach out to JM Bullion to purchase rectangular silver coins from the Perth Mint. Please feel free to reach out to us on the phone at 800-276-6508, chat with us live online, or email us directly.