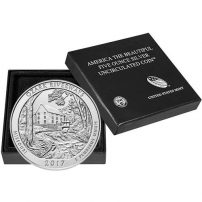 2014 5 oz ATB Everglades Silver Coin
As Low As:
Out of Stock

2013 5 oz ATB Perrys Victory Silver Coin
As Low As:
Out of Stock

2012 5 oz ATB Hawaii Volcanoes Silver Coin
As Low As:
Out of Stock

America the Beautiful is a 56-coin series available from the United States Mint. Introduced in 2010, the series is inspired by the State Quarters program the mint launched in the 1990s. The latter series put new reverse designs on the circulation 25-cent piece to represent each of the 50 US states and the nation’s various territories, as well as the District of Columbia. Unlike the State Quarters program, America the Beautiful is a bullion series that uses 5 oz blank to blow up the images of the traditional quarter and new reverse fields to impressive sizes. Since its 2010 debut, America the Beautiful silver coins have offered investors and collectors a wide range of options.

Each of the designs in the America the Beautiful Series comes with a Brilliant Uncirculated version. This version of the coin is ideal for investors and come with individual capsules, mint tubes of 10, or Monster Boxes of 100 coins. These coins do not feature a mint mark as the collectible versions of the coin do.

The United States Mint does offer its ATB Coins in options that are not always sold by authorized dealers. These include proof collector sets that pair all five designs from a given date mark together in a single set. Other collectible versions of the ATB Silver coins include BU coins that have been colorized. A colorized silver coin has thin layers of colorized lacquer applied only to the reverse field, in the case of ATB coins, to create a distinctive visual appeal for the ATB coins.

Unique to JM Bullion, you can also purchase ATB Silver Coins from our MintSealed range of products. With our MintSealed ATB Coins, we inspect the condition of Monster Boxes of 100 coins that receive to ensure that each individual mint tube of 10 coins contained in the box has not been tampered with. Once we confirm these tubes and coins are in the exact same condition as the moment the products left the US Mint, each tube is sealed in protective plastic and enclosed with a MintSealed JM Bullion label that indicates the coins within, as well as the purity and metal content. Again, the benefit of these JM Bullion MintSealed coins is the knowledge that these coins have not been tampered with or altered in any way. The coins went direct from the coin presses to the tubes and were sealed by JM Bullion before you bought each one.

Designs in the ATB Series

The America the Beautiful Series offers five distinct designs for each date mark in the series, with the lone exception being the 2021 date mark with just Alabama represented. The series offers a unique design for each of the 50 US states, the five overseas territories of the nation, and Washington D.C. Each jurisdiction is represented by a national park, preserve, or other federally-protected sites in the respective jurisdictions. Notably, the states are represented based on the age of the site chosen to represent it in the series going from the very first federally-protected site to the most recent. The reverse design order includes:

All of the coins in the ATB Series share the same obverse design element. On this face of the coins, President George Washington is depicted in left-profile relief. The bust of the nation’s first president featured on this side of the coin was created in 1932 by John Flanagan for use on the circulating quarter and was based on a 1786 bust sculpted of Washington during his lifetime. Inscriptions on this side of the coin read “United States of America,” “Liberty,” “In God We Trust,” “Quarter Dollar,” and on the Burnished ATBs, the “P” mint mark from the Philadelphia Mint.

If you’re interested in any of the America the Beautiful Silver coin varieties available, JM Bullion customer service can help you complete your purchase. Please contact us with questions at 800-276-6508, chat with us live online, or email us directly.