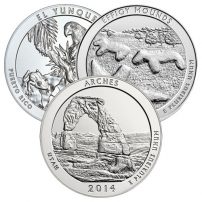 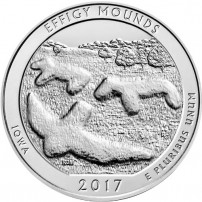 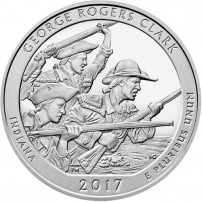 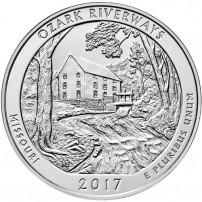 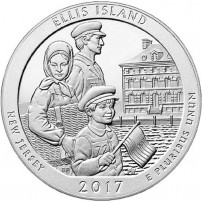 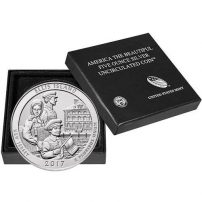 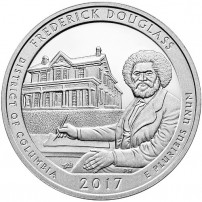 With each new release in the program, a different state and representative park, forest, or historical site is represented through a brand-new design. The images of these designs are often revealed in the months leading up to a new year, and in early December the final images chosen for the 2017 ATB Silver Coins were revealed by the United States Mint. The following offers an in-depth look at 2017 America the Beautiful Silver Coins from JM Bullion.

Meet the America the Beautiful Quarter

In 2008, Congress authorized the new America the Beautiful quarter with passage of the America’s Beautiful National Parks Quarter Dollar Coin Act. The legislation called for the production of a coin based upon the design of the United States quarter, but struck in a 5 oz. weight and featuring .999 pure silver.

The America the Beautiful coin series is scheduled to include 56 coins in total, with one to represent each of the 50 states in the nation, the District of Columbia, and the five overseas territories of the US: Virgin Islands, Puerto Rico, American Samoa, Northern Mariana Islands, and Guam.

Each year the Mint will release five new coin designs, with each state’s representative coin and image released in order that it was established as a federally protected region. The program started in 2010 with the nation’s oldest parks, monuments, or national forests depicted. Congress authorized the program to run through 2021, with the Secretary of the Treasury holding the power to extend the series through 2033.

The representative image chosen for each of the coins in the series is chosen in a collaborative process. This process includes the governor or chief executive from each jurisdiction, the Secretary of the Interior, and the Commemorative Coining Commission. The final design set selected for each coin must be approved by the Secretary of the Treasury before appearance on an America the Beautiful coin.

Based Upon the State Quarters

The ATB Silver Coin series from the United States Mint is easily recognizable as an entirely different program than the circulation coins that inspired its development. The major difference is the use of the different coins. While the state quarters program altered the design of America’s circulation 25-cent pieces, the ATB Silver Coin series is intended for investors and collectors looking to purchase pure silver products.

Each ATB Silver Coin contains .999 pure silver, while state quarters have a copper-nickel alloy that makes them more resilient in circulation. While both coins have a face value of $.25 (USD), the ATB Silver Coins have a total weight of 5 oz, are significantly larger than circulation quarters, and are not used for settling personal and private debts as they are worth much more than their legal-tender face value. Other details and facts include:

The main similarity between the coins is the obverse design. Like quarters, all 2016 ATB Silver Coins share a common obverse design that has been standard on American 25-cent pieces for over 80 years. The left-profile portrait of President George Washington is featured on this side, along with the engravings “United States of America,” “Liberty,” and “In God We Trust.” You will also find the face value of the coins, “Quarter Dollar,” engraved on this side, along with the mint mark in some cases.

For the 2017 release of America the Beautiful silver coins, you’ll find the following states or territories represented in the program (in order of release):

The first release of the year represents the state of Iowa in the ATB Series. The Effigy Mounds National Monument is a federally protected area in the state of Iowa, in Allamakee and Clayton Counties, that preserves more than 200 prehistoric mounds built by various Native American tribes. The mounds have various shapes, with the most common including bears and birds, and were built during the first millennium.

On the reverse of the 2017 1 oz ATB Effigy Mounds National Monument Silver Coin is the image of some of the mounds created by the people of the Woodland Cultures. Included are engravings of the state of issue, representative park, and the year of issue.

Second in the release is the Washington DC coin, which represents the federal district known as the District of Columbia. The 2017 5 oz ATB Frederick Douglass National Historic Site Silver Coin honors the site in Washington D.C. administered by the National Park Service that preserves the home and estate of Frederick Douglass, an abolitionist and prominent African American in 19th century America.

For the 3rd release of 2017, Missouri is represented. The Ozark National Scenic Riverways is an 80,000 acre park located in the Ozarks of southern Missouri. The park protects the Current and Jacks Forks rivers in the area. It not only provides protection to the abundant plant and animals species in the area, but also provides clean recreational options for Americans, of which canoeing the rivers is the most popular past time.

On the reverse of the 2017 5 oz ATB Ozark National Scenic Riverways Silver Coin is the image of a small creek as it rolls toward a fork in the land in front of it, with a modest cabin perched at the fork of the two rivers. Engravings identify the name of the park, the state of issue, and the year of issue for the coin.

The penultimate release of 2017 honors Ellis Island and represents New Jersey in the ATB Series. Ellis Island is actually just one part of the larger Statue of Liberty National Monument complex run by the U.S. National Park Service. Comprised of two islands, the national monument includes Liberty Island with the famed Statue of Liberty reaching her torch high into the sky as a light for the oppressed people of the world.

On the reverse of all 2017 5 oz ATB Ellis Island National Monument Statue of Liberty Silver Coins is the image of the immigration processing building that still stands to this day on Ellis Island. In the foreground, an immigrant family looks on as their boat pulls into the harbor with a young boy holding a small American flag in his hand.

The final coin in the 2017 ATB collection represents the state of Indiana. On the banks of the Wabash River in Vincennes, Indiana sits the site believed to be home to Fort Sackville. Originally the site was a trading post established by Sieur Juchereau, Lieutenant General of Montreal in 1702. It was renamed Fort Sackville in 1766 by British Lt. John Ramsey after he took control of the settlement and built up the fort in the name of George Germain, Lord Sackville.

Today, the site is known as George Rogers Clark National Historical Park after Lt. Col. Rogers Clark who led American forces in a siege on the fort in 1779. The brother of William Clark, he defeated the British forces under British Lt. Governor Henry Hamilton and captured the fort, which remained in American hands throughout the remainder of the Revolution.

On the reverse of the 2017 5 oz ATB George Rogers Clark National Historical Park Silver Coin is the image of frontiersmen under the direction of Lt. Col. Rogers Clark as they charge the British positions. His march from the Mississippi River in mid-winter to defeat the British at Fort Sackville remains one of the great feats of the American Revolutionary War.

Please reach out to JM Bullion if you have any questions about buying silver coins. Our team is available to you on the phone at 800-276-6508, on the web using our live chat service, and via our email address. Our Payment Methods FAQ page has immediate answers to your common questions about payment options and applicable minimums and maximums.