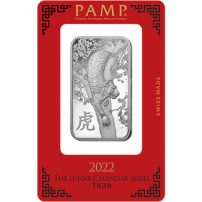 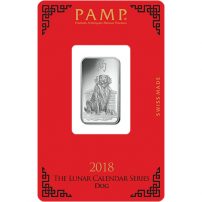 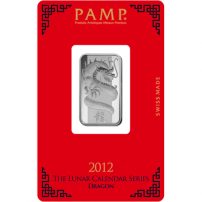 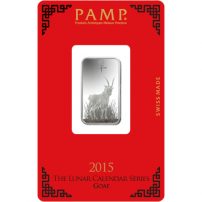 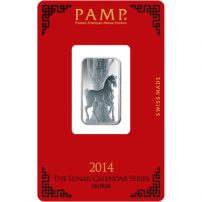 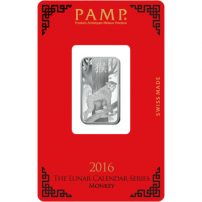 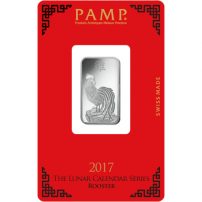 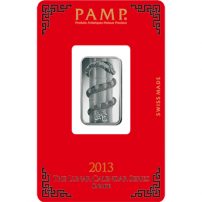 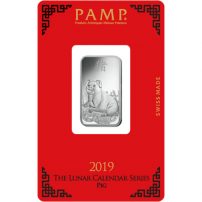 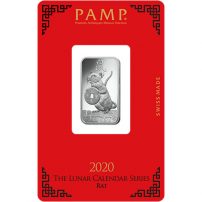 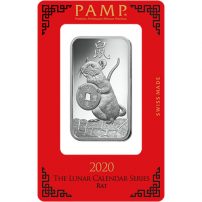 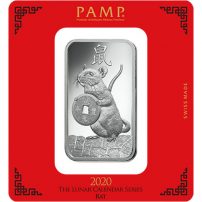 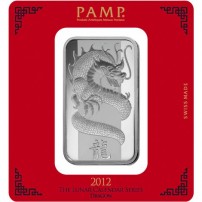 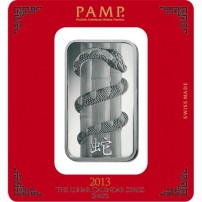 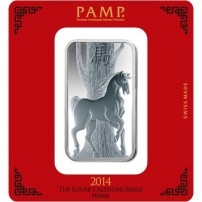 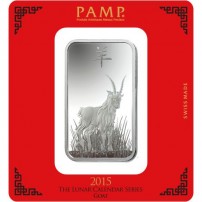 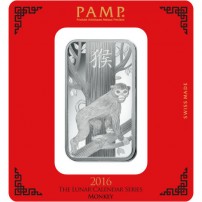 PAMP Suisse, formally known as Produits Artistiques Metaux Precieux, is widely regarded as the leading bullion brand in the world. PAMP Suisse is best-known for the production of gold and silver bars for sale. Among these beautiful bullion products are collections such as Fortuna, Rose, and the Lunar Bars. The latter is one of the more unique from PAMP Suisse as it offers new designs to match each of the 12 animals on the 12-year cycle of the Chinese Lunar Calendar, or Zodiac. JM Bullion carries a variety of PAMP Suisse Lunar Silver Bars and you can learn more about each design below.

The first PAMP Suisse Lunar Silver Bar design to debut was the 2012 Year of the Dragon design. This coincided with the fifth year in the 12-year cycle of the Zodiac and marked the start of a series that continues to this day with 2019 Year of the Pig designs, marking the final year in the 12-year cycle. When you buy silver bars online in this collection, each one is initially housed inside of a protective plastic package that is sealed with a Red Assay Card. The Assay card available with each individual bar includes the weight, purity, metal content, serial number, and signature of a certified assayer on the card.

All PAMP Suisse Lunar Silver Bars contain .999 silver purity by weight. Most of the silver bars available from JM Bullion are 10 Gram specimens, but PAMP also issues its Lunar Collection silver bars in weights that include 100 Grams and 1 Troy oz. Most impressive about this collection are the designs on the PAMP Suisse Lunar Bars. There are two distinct design options available in the collection. The 2012-2014 and the 2016 designs offer a single animal representative of the Zodiac that is captured in opposing views from in front of and behind the animal. The 2015 Year of the Goat design introduced a creative approach that would later return in the 2018 and 2019 designs. More unique still, the 2017 Year of the Rooster offers its own distinctive visuals.

The first design was the 2012 Year of the Dragon. None of the bars in this series have a date mark, but the included Red Assay card does have a date mark noting the year on the Lunar Calendar which that animal represents. The Year of the Dragon silver bar features the image of a serpent-like dragon as its body wraps around a pole. You can see the revered creature from the front on the obverse and the back on the reverse.

For the 2013 Year of the Snake, the design is similar to that of the Year of the Dragon. Here, a snake wraps its body around a bamboo shoot and is visible from different angles on the obverse and reverse sides. The Year of the Dragon and Year of the Snake designs are similar due to their background story for the Zodiac. All animals are placed in order on the 12-year cycle with the Jade Emperor having chosen their position based on their arrival at a meeting. The dragon arrived 5th and its impressive beauty caught the Emperor’s eye immediately. He promised the dragon and his son the 5th and 6th spots on the Zodiac, but the dragon’s son did not come to the meeting. The quick-witted snake chimed in to say that the dragon was like a stepfather to him, so the Emperor made him sixth instead.

The third issue was the 2014 Year of the Horse design. Like the two previous release, this bar captures the image of a powerful stallion standing in front of a tree on the obverse. The reverse offers the opposite angle of this image as viewed from behind the tree, where you can see just a portion of the horse’s head as its tail wraps around the trunk of the tree.

The Year of the Goat release includes a design concept that was new to the collection. On the obverse side, you can view an adult goat standing in front of a bush. Flip the bar to the reverse, and you’ll see that same image from behind. This time you’ll see a small lamb lies within the shade of that bush as you view the back of the adult goat.

The Year of the Monkey issue for 2016 marked a brief return to singular front-back designs. On the obverse, a monkey walks along the branch of a tree passing in front of the tree’s trunk. Flip it over to the reverse, and you’ll see the backside of the tree’s trunk obscuring most of the monkey’s body with the exception of its tail as it wraps around the tree.

The Year of the Rooster design has its own unique design elements. Though it does offer reflective images like earlier designs, it is still a bit different. Here, you’ll find a rooster standing on the edge of a rock cliff as it looks back behind it toward its brilliant tail plumage. The reverse captures the same image from a vantage point off the edge of the cliff as the rooster looks back away from the edge of the cliff.

The 2018 Year of the Dog design returns to the concepts of the Year of the Goat release. On the obverse of these bars is an adult dog sitting in front of a doghouse. On the reverse face of the bar, you can see the front of the dog house with a young puppy laying in its opening. The adult dog is visible from behind on this side of the bar.

Once again, the 2019 Year of the Pig design offers two different takes on the same design imagery. The obverse features the image of an adult pig laying in some grass in front of a small wooden fence. On the reverse of the bar, you view this scene from the other side of the fence and see that a chest full of coins is placed on the ground with young piglets playing around it.

When you’re ready to buy silver from the PAMP Suisse Lunar Bar collection, JM Bullion has the products you’re looking for. Invest in silver and add these silver bars to your collection now. You can call us for assistance at 800-276-6508, chat with us live online, or simply email us.