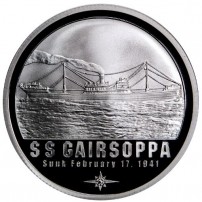 Please note that as our stock dwindles, we no longer have sealed mint tubes available. These rounds will ship in plastic flips normal tubes. JM Bullion is excited to offer these unique 1 oz S.S. Gairsoppa Silver Rounds minted with actual silver recovered from the infamous S.S. Gairsoppa Shipwreck. Each round contains 1 troy ounce of .999 fine silver and has been struc... Read More 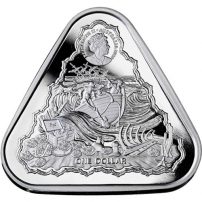 The Royal Australian Mint’s Shipwreck Series continues with 2020 date marks and a new design. Just like the debut release, this triangular silver bullion coin depicts a Dutch East India Company vessel that met its fate on the high seas after striking a reef off the coast of Australia. Today, 2020 1 oz Australian Shipwreck Vergulde Draeck Silver Coins are available to you... Read More 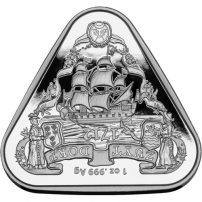 The 2020 Australian Shipwreck Series moves on to a third release in the series that features one of the most mysterious shipwrecks along the coast of Western Australia. The Zuytdorp was dispatched from the Netherlands in 1711 with a load of silver coins destined for the Dutch East India Company’s trading port of Batavia. Now, 2020 1 oz Australian Shipwreck Zuytdorp Silve... Read More 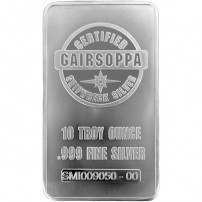 JM Bullion is thrilled to offer this extraordinary 10 oz S.S. Gairsoppa Shipwreck Silver Bar composed of sunken treasure, that is, silver recovered from the bottom of the Atlantic Ocean after its transporting vessel was torpedoed by a German U-Boat in 1941. The exciting recovery of this silver just a few years ago has resulted in thi... Read More

Silver recovered from shipwrecks is becoming a popular new silver source for investors, collectors and history enthusiasts. New technologies have made it increasingly more likely for shipwrecks to be discovered and for the cargo, miles below the surface, to be retrieved.

Though the value of silver is primarily determined by the weight and purity of the precious metal, where the silver is minted or retrieved from can further add to its value. In just the past couple of years, large amounts of silver have been recovered from the S.S. Gairsoppa, creating a new source for investors of great value and high interest due to its history as shipwrecked silver.

Over 70 years ago, during WWII, British silver stocks were being depleted by the war. The Royal Mint ordered silver supplies from India. Large amounts of silver bullion ingots were sent via the merchant ship, the S.S. Gairsoppa, along with pig iron and tea.

It originally sailed under the protection of the British navy. Heavy swells and high winds forced the Gairsoppa to slow down. As the bad weather increased, the captain determined the struggling ship didn’t have sufficient coal to make it to Liverpool, so it broke off from the convoy and headed for Galway, Ireland.

On February 17, 1941, about 300 miles southwest of Ireland, a German U-boat fired a torpedo at the ship. The weapon tore through the Gairsoppa’s hull and exploded. The forward mast toppled, snapping the antenna, and isolating the ship from outside help. The U-boat continued to fire on the Gairsoppa until it sank, resting some 2.9 miles below on the ocean floor (below the depth of the Titanic).

The British government invited salvage companies to recover the lost silver in 1989. It wasn’t until January of 2010 that the US Company, Odyssey Marine Exploration, was awarded a two-year contract to locate and retrieve the 240 tons of silver.

The chief executive of Odyssey, Greg Stemm, noted that this is the deepest and heaviest cargo of precious metal ever retrieved from a shipwreck. He also said that these old bars no longer exhibit the shimmering patina usually seen with fresh silver. “It’s been under water so long, it could be mistaken for iron,” he explained.

As of 2013 the Odyssey had recovered a total of 1,203 silver bars. That amount equals 1.4 million troy ounces of silver (48 tons), which, according to today’s rates, would fetch about $38 million.

At the time Gairsoppa was sunk, the value of the silver was in excess of $1.8 million. As of 2014, the total worth of the silver is estimated to be $190 million.

Because of the great success Odyssey had using robot technology to retrieve the lost silver, the company has expressed elation at the possibility of retrieving precious metals from other shipwrecks. “There are billions of dollar's worth of cargoes that have been considered unrecoverable,” Mr. Stemm said. “This opens up the entire ocean floor.”

This silver that has sat at the bottom of the ocean for about a person’s lifetime is a real sunken treasure. The silver being made available by the crew of the Odyssey Expedition has turned the silver into 10 ounce bars and 1 ounce rounds with the help of the Sunshine Mint and have made them available for purchase. Currently, the silver bars are being sold for only a small premium over the cost of the spot price of silver.

The ingots have a nice design, using large, bold lettering that identifies the metal on one side, and on the other is a beautiful relief sculpture of the sunken ship, the Gairsoppa. They are not simply silver ingots, but actual pieces of maritime history.

Since May 2013 Odyssey Marine believes there are still some 1,600 insured silver ingots left to be retrieved, and a substantial unknown amount of uninsured silver still resting on the ocean floor. There are plenty of 10 ounce bars and 1 ounce SS Gairsoppa Shipwreck Silver Rounds available for purchase through JMBullion.com.