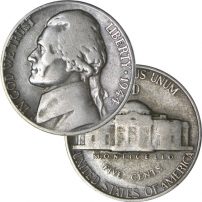 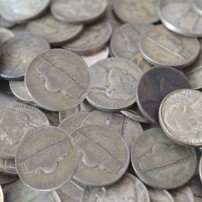 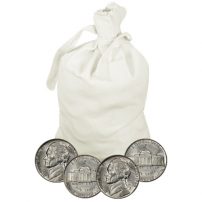 The United States Mint has a rich history of producing silver coins that actually contain silver. From 1794 to 1836, most of the silver coin denominations had 89.2% silver and 10.8% copper content. From 1836 until 1964, all of those same denominations had 90% silver content and 10% copper. While two denominations of US currency were briefly issued with 40% silver, no coins from the US Mint were ever introduced as 35% silver coins. However, during World War II, a necessary change was made to the content of the US nickel that resulted in the release of 35% silver coin for a brief period of time during the war.

Throughout most of its production history, the US nickel contained a metallic composition of 75% copper and 25% nickel. However, as the United States found itself pulled into World War II, it discovered that nickel was in short supply and was a vital war material if the nation hoped to be successful. With the need for nickel in wartime supplies greater than the need in US nickels, the US Mint adjusted the metal content of its nickels.

There was one big hurdle to the adjustment of the US nickel’s metal content. Nickels were popular in vending machines in the 1930s and 1940s, and the metal content needed to be adequately adjusted to still work with those vending machines. The resulting coin had 56% copper, 35% silver, and 9% manganese. Struck only from mid-1942 to the end of the war in 1945, these nickels became colloquially known as War Nickels.

The design of the US nickel during the period of 35% silver coining did not change, but rather the visual appearance of the coin’s colorization and the metallic content of the coins were altered. The Jefferson Nickel design that had been introduced in 1938 to replace the popular Buffalo Nickel was the featured imagery of the 35% War Nickel. Its depictions included:

As you view our online inventory, you will find Silver War Nickels available in bulk options with varying conditions. JM Bullion customer service is available to you on the phone at 800-276-6508, online through our live chat, and via our email address.