From 2016 to 2021, the Royal Mint wowed investors and collectors with its Queen’s Beasts Series. This 10-coin series featured gold, silver, and platinum coins with images of the heraldic beasts that have featured in the personal badges, seals, and Royal Arms of the monarchs of England from the reign of King Richard the Lionheart in 1198 to those Queen Elizabeth II still carries today. With that beloved series now concluded, the Royal Mint now offers history enthusiasts a new heraldic beast series focused on one of the nation’s most infamous dynasties: House of Tudor. Explore the first release of the new Tudor Beasts Series. 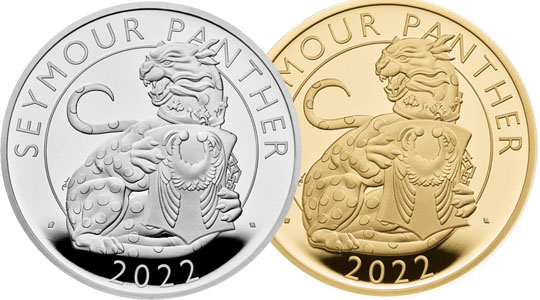 On the reverse of the first release of the series, coins like the 2022 1 oz Proof British Gold Tudor Beast Seymour Panther Coins feature the seal and personal badge of Jane Seymour. The design shows a shield with the Seymour Wings on it, a set of conjoined wings with the wingtips pointed downward. The shield is supported by a spotted panther that has flames coming from its ears and mouth.

The obverse design of all the coins in the new 2022 Proof British Tudor Beast Seymour Panther release features Queen Elizabeth II. Her Majesty continues to feature on British coins in the 2015 portrait created by Jody Clark. The Queen is shown at the age of 89 wearing the George IV State Diadem Crown.

In the release of the Tudor Beasts coins from the Royal Mint, collectors will have the chance to purchase one of five options from JM Bullion. Our selection of Tudor Beasts coins comes with four proof silver coins and one proof gold coin. These include the following coins with the associated mintage for each:

Each coin is individually packaged by the Royal Mint. The 1 Kilo Silver and 1 oz Gold Coins come in wooden presentation boxes, while the 10 oz, 5 oz, and 1 oz Silver Coins come from the mint in black display boxes. Each coin has a Certificate of Authenticity with frosted designs and mirror-like fields.

The Tudor Dynasty rose out of the ashes of the Wars of the Roses. Henry Tudor was head of the House of Lancaster, one of two cadet houses of the Plantagenets that was embroiled in a civil war for the crown of England. When Henry and his forces defeated King Richard III of the House of York at the Battle of Bosworth Field, he laid sole claim to the throne. After marrying Elizabeth of York to unify the houses, he founded the House of Tudor and reigned as King Henry VII. His son, King Henry VIII went on to become one of the most infamous monarchs in British history. Henry VII’s granddaughter, the future Queen Elizabeth I, offered stability to and rebirth for the kingdom during her long reign at the end of the 16th century.

The Tudor Beasts Series features 10 heraldic beasts inspired by the stone statues that line Moat Bridge, the entrance to Hampden Court. The Seymour Panther is the first release in a series that is planned to feature the Lion of England, Greyhound of Richmond, Yale of Beaufort, Tudor Dragon, Seymour Unicorn, Royal Dragon, Queen’s Lion, Black Bull of Clarence, and the Queen’s Panther.

With limited mintages across this exciting new release of proof coins, you’ll want to act quickly when each design releases. Please feel free to contact JM Bullion with any questions by calling us at 800-276-6508, chatting with us live online, or simply sending us an email. Don’t hesitate to follow us on Facebook and remember to read our blog posts for more in-depth information.