To say that David Bowie was an icon of music is putting it mildly. The innovative rocker who was born David Robert Jones in Brixton, London, in January 1947 went on to become not only a legend in British music, but a global icon whose ever-changing style, appearance, and sound captivated audiences across several decades and generations. Though he suffered an untimely death in 2016 following a battle with cancer, his legend lives on in more ways than one. The Royal Mint’s British coin series known as the British Music Legends now features a third design that honors the Starman himself. 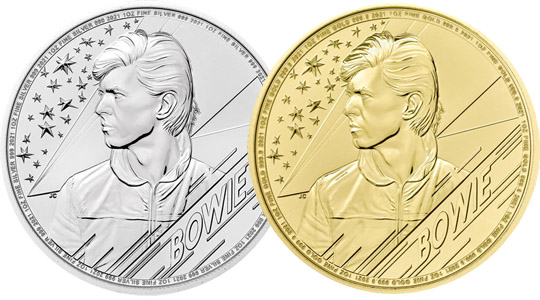 On the reverse side of the 2021 1 oz British Music Legends David Bowie Silver Coins, and all other releases in the series, you will find the image of the iconic rock legend. Bowie is shown in front-facing relief with his head turned to his right. The effigy of Bowie emerges from between a lightning bolt that cuts vertically down the surface of the coin. In the upper left, you will find a field of stars, while in the lower right there is the trademark script with his last name. The portrait of Bowie on this side of the coins is, as the Royal Mint puts it, from his Aladdin Sane era. The Aladdin Sane era refers to his 1973 album of the same name that was the first in his career that was released after he had gained widespread stardom. It arrived during the Ziggy Stardust era of his career that lasted from 1972-1974.

The obverse field of 2021 1 oz British Music Legends David Bowie Gold Coins and the other coins in the third release of the collection feature the historic fifth-generation effigy of the Queen. Her Majesty is depicted in right-profile relief wearing the stunning George IV State Diadem Crown. In this design from Jody Clark, Queen Elizabeth II is captured at the age of 89 with a guilloche background element visible on both the 1 oz silver and 1 oz gold Brilliant Uncirculated coins. The proof options have a clean, mirrored field in the background of the obverse.

The Royal Mint of England introduced the British Music Legends Series in 2020 with silver and silver BU coins, as well as proof collectible options. JM Bullion carries some of the leading options across the range, including the following coins:

All of the coins in this release come with mintage limits that vary across both metal type and finish type. For example, the 1 oz Silver BU coin has the highest mintage level at 25,000 coins in total. The other coins listed above have mintages of 2,500 Gold BU coins, 8,000 1 oz Silver Proofs, and 12,500 1/2 oz Silver Proofs.

If you have any questions about the latest release in the British Music Legends Series, please feel free to ask. JM Bullion customer service can assist you at 800-276-6508, online through our live chat, and via our email address. You can follow us on Facebook for weekly posts and read our weekly blog updates as well.