The Royal Mint of England has released a new series of collectible coins honoring the legends of international music. In this collection, you will find images honoring some of the best-known individuals and musical groups from the past several decades. A fitting first group to feature, Queen is honored with the first design release in the new Music Legends. At JM Bullion, you will find two of the most beautiful options in the Royal Mint’s release in the series. 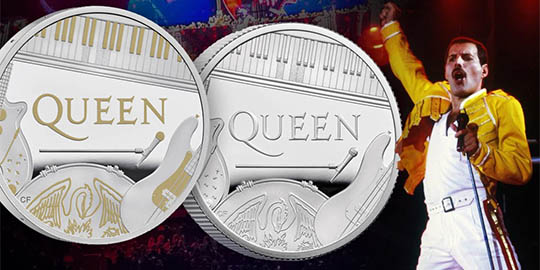 The obverse field of the 2020 Proof British Music Legends Queen Silver Coins features the effigy of Queen Elizabeth II. Her Majesty has featured on the obverse of all British denominations since her ascension to the throne in 1953. In this design from July 2015, Jody Clark captures the Queen at the age of 89 with the George IV State Diadem Crown. This impressive crown was commissioned by King George IV during the first year of his reign in 1820. It includes a total of 1,333 diamonds weighing more than 300 karats. The Queen is surrounded by inscriptions of the face value, date mark, the Queen’s name, and the shorthand phrase “D.G. Reg F.D.” Unlike bullion coins, these proof coins have a clear, mirrored field.

On the reverse side of the 2020 Proof British Music Legends Queen Silver Coins is a design with the musical instruments of the group Queen. All versions of the coins in the Music Legends Queen coins have a microphone stand arranged horizontally across the center with the word “Queen” above it. The top of the design field features the keys from a keyboard, while two guitars and a drum are featured at the bottom of the design field. Portions of the design elements have a frosted finish while the background elements are mirrored.

Difference in the 1 oz and 1/2 oz Silver Coins

Among the proof silver coins available in the Music Legends Queen release, the 1 oz silver coin and 1/2 oz silver coin have important differences that you will notice once you see the coins. The 2020 1 oz Proof British Music Legends Queen Silver Coin features gold colorization on select portions of the reverse field. This includes the bird on the drum, pieces of the guitars, and select keys on the keyboard. More importantly, the 1 oz proof coin has an edge-lettering that includes the last names of the four original members of the group Queen. The 1 oz coin is the only one in the series with the colorization added and the edge-lettered names.

By contrast, the 2020 1/2 oz Proof British Music Legends Queen Silver Coin has a reeded edge around the coin and no colorization added. Aside from these two distinctions, the coins are alike in appearance and the use of the designs.

The 1 oz proof coin in this series has a limited mintage of 7,500 silver coins packaged in a black Royal Mint display box and shipped with a Certificate of Authenticity. The 1/2 oz proof coin has a much higher mintage of 17,500 silver coins and are packaged in an acrylic book with a clear lid that came with a Certificate of Authenticity as well. Both designs in the collection come from Chris Facey.

Queen formed as a British rock band in London in 1970. Prior to the group of four coming together to form Queen, Brian May and Roger Taylor were performing together in a band known as Smile. Freddie Mercury, a fan of the group, encouraged May and Taylor to experiment with new staging and recording practices and techniques. When Mercury joined the group, they became known as Queen and the trio eventually recruited John Deacon. From 1973 to 1986, Queen was one of the most successful rock bands in the world.

The group’s first album came out in 1973. Success was not far behind as the second album released in 1974 quickly became a chart-topper in the United Kingdom. The group’s third album brought international success for the first time in 1975 with “Bohemian Rhapsody.” Through the 1970s and early 1980s, Queen was the top stadium rock band in the world and songs from the group such as “We Will Rock You” and “We are the Champions” became staples of sporting events around the globe.

Right now, you will find the Proof British Music Legends Queen Silver Coins available on presale with JM Bullion through March 11, 2020. You can reserve your coin now and once the coins are in stock, we will package and your ship your coins. If you have questions, please contact JM Bullion at 800-276-6508, chat with us live online, or email us. Don’t forget to check our weekly blog posts and follow us on Facebook for daily updates and fun spot price contests.