Release the Kraken! The Royal Canadian Mint Revives a Legend

Outside of its Canadian Maple Leaf Series of bullion coins, the Royal Canadian Mint is perhaps most famous for its creation of wildlife themed gold and silver coins. Throughout the 2010s, investors and collectors alike have reveled in the beautiful designs of other Canadian bullion programs, including Canadian Wildlife Series, Birds of Prey Series, Reverse Proof Birds of Prey Series, and the Wild Canada Series. Now, a new collection of 2 oz silver coins emerges from the Royal Canadian Mint in the Creatures of the North Series. Blending the mint’s focus on wildlife designs with the mythical world, the Kraken rises from the depths as the first coin from the Creatures of the North! 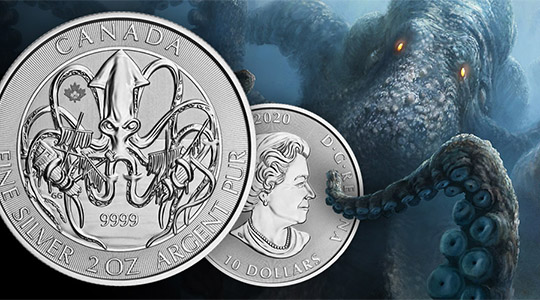 The Kraken Emerges from its Slumber

The reverse field of the 2020 2 oz Canadian Kraken Silver Coin shows the sheer power and terror of an attack by the Kraken. The squid-like beast was rumored to be the size of an ocean-going vessel and in the reverse of this coin, you can see the Kraken is far larger than the unfortunate ship it has entangled in its tentacles. The beast has fully emerged from the water to snap the masts, tatter the sails, and break this poor ship in half. The fate of its sailors is probably the same as the ship itself: doom. Inscriptions on this face of the coin include “Canada,” “9999,” “Fine Silver 2 oz Argent Pur,” and “GG.” The latter inscription is the initials of the designer of the Kraken image, Gerald Gloade.

On the obverse of 2020 Canadian Kraken Silver Coins, you will find the familiar right-profile portrait of Queen Elizabeth II. Designed in 2003 by Susanna Blunt, this effigy of the Queen is the fourth during her reign as Queen of England and is the first monarch portrait for Canadian denominations since the reign of King George VI to depict the monarch without a crown. In keeping with Royal portrait tradition on coins, the Queen’s effigy is opposite that of her father, King George VI. His effigies on British and Commonwealth coins were left-profile busts, while Queen Elizabeth II’s are all right-profile busts. Inscriptions include “Elizabeth II,” “2020,” “D.G. Regina,” and “10 Dollars.”

The first thing you’ll notice once you have your 2020 2 oz Canadian Kraken Silver Coin in hand is its heft. These 2 oz coins are the same size as the standard 1 oz bullion coin the Royal Canadian Mint issues. This means that the coin doubles the weight in a blank with the same diameter as a 1 oz coin, creating exceptional depth to the product. The obverse field has a full background of radial lines, while the outer rim of the reverse field also has radial lines. Also included on the reverse is the Royal Canadian Mint’s micro-engraved maple leaf privy with the “20” date mark inside.

Each coin is available to you in Brilliant Uncirculated condition with 2 Troy oz of .9999 pure silver content. Individual specimens will ship in plastic flips, while multiples are available in tubes of 14 or boxes of 280 coins.

History of the Kraken

The Kraken is arguably the most feared beast of the ancient seas. Confused sailors unable to come up with other excuses for what attacked their ship or simply exaggerating out of confusion and terror, conjured up the idea of the Kraken. Historically, the Kraken was a squid-like beast rumored to have an impossible size and a thirst for revenge. Norse sagas recorded by Viking sailors were the first to tell the tale of a the Kraken. It was believed this beast lived in the frigid depths of the North Seas and North Atlantic between Norway and Greenland.

While the Vikings were the first to chronicle the beast in the 13th century, the 15th- and 16th-century explorers coming to the New World had their own healthy fear of the Kraken. If you looked at navigational charts and maps of the 16th century, it would have been common to find depictions of the Kraken on such far-flung locales as New Zealand, the Indian Ocean, South Africa, and the Caribbean.

Canadian Connection to the Kraken

The sailors traversing the sea routes between North America and Europe during the 17th, 18th, and 19th centuries were no strangers to the tales of the Kraken. Even as the dawn of the 20th century approached, sailors still had a fear of this mythical beast. In Canada, that fear came to life in 1878 when the carcass of a giant squid washed up on the shores of Glovers Bay in Newfoundland. The squid that washed up that day was straight from the nightmares of generations of sailors. It measured an astonishing 55 feet in length.

The all-new 2020 2 oz Canadian Kraken Silver Coin is now available for presale online from JM Bullion. The coins are due in on or around February 25, 2020. If you purchase now, your order will be packed and shipped as quickly as possible once the coins are in stock. Please feel free to reach out to JM Bullion if you have any questions by calling us at 800-276-6508. You can also contact us online through our live chat and email address features. Keep reading our blog each week for exciting, in-depth looks at new releases and make sure you’re following us on Facebook for the chance to win gold and silver in our spot price guessing games.