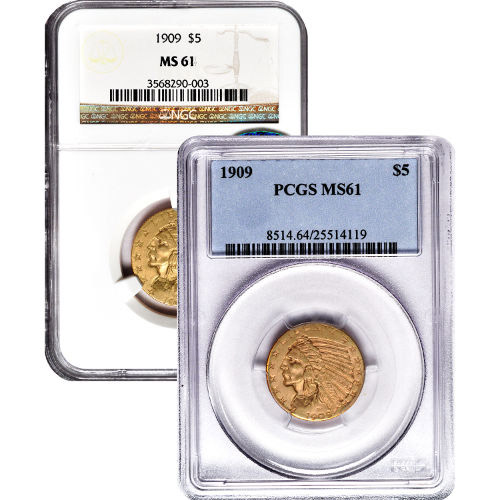 From 1792 to 1933, the United States Mint struck circulation gold coins for use in commercial transactions. These coins were known as Gold Eagles, and the central denomination was the Gold Eagle coin issued for $10. Various options were also struck in different weights, including the Half Eagle at $5 (USD). Right now, Pre-33 $5 Indian Gold Half Eagle Coins are available to purchase online from JM Bullion in Mint State condition.

The Pre-33 $5 Indian Gold Half Eagle Coin is one of only two gold coins ever struck by the United States Mint with an incuse design field. The Indian Head design set featured on the coin’s obverse side was created by Bela Lyon Pratt for the Gold Eagle coins in 1907, but only the quarter-eagle and half-eagle coins bore the incuse design.

Each Indian Gold Half Eagle Coin listed for purchase here today is in Mint State 61 condition. Coins with an MS61 grade have diminished or noticeably impaired mint luster, and can feature contact marks that are clustered in large or small groups. Hairlines are also likely to be noticeable on the coin’s surface area.

On the obverse of the Pre-33 $5 Indian Gold Half Eagle Coin is the left-profile portrait of the Indian Head design. Struck in an incuse manner, the design set is sunk into the surface of the coin. The Indian featured is wearing a full headdress and is surrounded by 13 stars, the word “Liberty” above, and the coin’s random year of issue.

The reverse of the Indian Gold Half Eagle Coins bears the image of an American bald eagle. This bald eagle is depicted sitting in a perched position with its wings folded in at its side. At its feet are a cluster of arrows wrapped in the olive branch of peace. The nation of issue, face value, and national motto are all engraved on this face of the coin as well.

Though the Pre-33 $5 Indian Gold Eagle Coins do not feature mint marks, the United States Mint produced the coins during their 20-year run at the Philadelphia Mint, Denver Mint, San Francisco Mint, and the now-defunct New Orleans Mint.