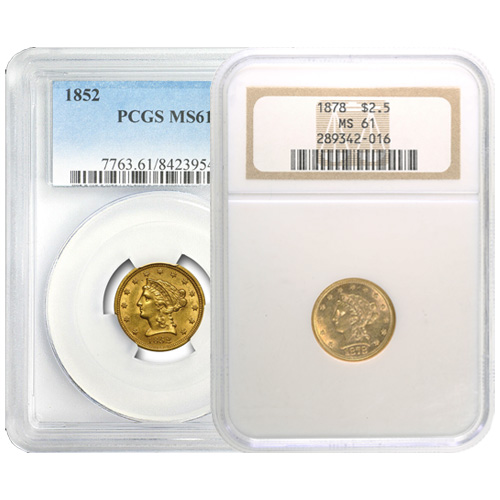 One of the first gold coins produced by the United States of America was the Gold Eagle Series of circulation coins. From the moment the US Mint began operations following its 1792 founding, gold coins in the Gold Eagle Series were in production for American citizens to use in commercial transactions. One of the most popular coins of this series is the Gold Quarter Eagle coin. The Pre-33 $2.50 Liberty Gold Quarter Eagle Coin is currently available to you for purchase online from JM Bullion with a certification.

Throughout its early production history, the original Turban Head (Capped Bust) design was altered noticeably on two occasions. Robert Scot’s original design had a traditional turban on Liberty’s head in right-profile relief. The 1808 redesign from John Reich switched that turban out for a traditional cap instead. This design persisted, with minor changes for the resizing of the coins, until 1834.

After a brief production of so-called Classic Head Quarter Eagles, the Liberty Head design debuted in 1840 and proved to be the most popular and longest-running design. On the obverse of these Pre-33 $2.50 Liberty Gold Quarter Eagle Coins is the image of that Liberty Head design. She is featured in left-profile relief wearing a crown with her hair in a bun. The word “Liberty” is inscribed on the crown, there are 13 stars around her, and the date mark is at the bottom.

The reverse of Pre-33 Liberty Gold Quarter Eagle Coins includes the image of heraldic eagle. An early depiction of the design that features on the American Silver Eagle today, this design includes an American bald eagle behind the national shield with arrows in one talon and the olive branch of peace in the other.

These Pre-33 $2.50 Liberty Gold Quarter Eagle coins have a Mint State 61 certification from either the PCGS or NGC. Coins in this condition showcase diminished or noticeably impaired mint luster, clusters of large and small contact marks throughout, and noticeable hairlines. We cannot guarantee the date mark of the coin you receive, but it will feature the Liberty Head design and have the MS61 certification of either grading house.

We encourage JM Bullion customers to call us with questions about gold for sale at 800-276-6508. You can also connect with us online through our live chat and email address features.