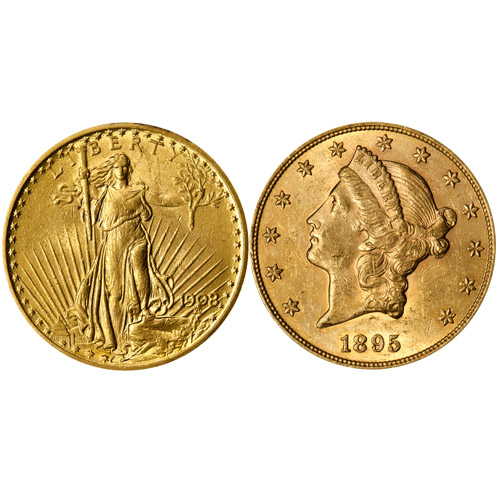 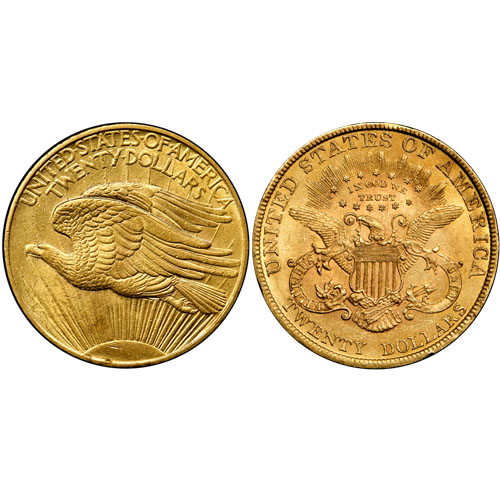 The $20 Gold Double Eagle Coin was the largest denomination of gold coin ever issued by the United States Mint. Introduced in 1849 following the California Gold Rush, the coin joined the existing US Eagle, Half Eagle, and Quarter Eagle denominations already in production as of 1795. Now, Pre-33 $20 Liberty and Saint-Gaudens Gold Double Eagle 2-Coin Sets are available to you for purchase online from JM Bullion.

The United States Mint introduced the Gold Double Eagles in 1849 following the influx of gold to the US Treasury from the California Gold Rush. Unlike the other coins in the series, the Double Eagle would only go through two design options in its history. The Liberty Head coin was available from 1849 to 1907 with a design from James B. Longacre.

In 1907, Augustus Saint-Gaudens redesigned the designs for the obverse and reverse fields of the Double Eagle. Saint-Gaudens was commissioned directly by President Theodore Roosevelt to help revitalize the nation’s coinage.

Lady Liberty is found in one of two different designs on the obverse of the coins in this Pre-33 $20 Liberty and Saint-Gaudens Gold Double Eagle Set. The Liberty Head coin features a left-profile portrait of Liberty wearing the coronet crown. The Saint-Gaudens coin features a bold, front-facing effigy of Liberty walking toward the viewer with a torch in her right hand and an olive branch in her left.

American bald eagles are depicted in the reverse design of the coins in the Pre-33 $20 Gold Double Eagle 2-Coin Set. The Liberty Head coin features a depiction of the heraldic eagle with the US national shield, the arrows of war, and the olive branch of peace. Sun rays extend from wingtip to wingtip on the bird with a circular constellation of 13 stars above. From 1849 to 1866, the coins lacked the national motto of IN GOD WE TRUST. After 1876, the coins had the denomination spelled out as TWENTY DOLLARS instead of TWENTY D. The Saint-Gaudens coin features the bald eagle gliding in flight over the sun, with all coins after 1908 featuring the national motto.

These Pre-33 $20 Liberty and Saint-Gaudens Gold Double Eagle 2-Coin Sets come with one randomly dated coin from each collection. Liberty Head coins come with dates from 1850 to 1907, while Saint-Gaudens coins come with dates from 1907 to 1933. All coins are in Very Fine+ condition. Coins in this range have medium to light wear, with all the primary details visible and the possibility for some trace mint luster to be present.

JM Bullion customer service is available at 800-276-6508. Our team is available online as well using our live chat and email address features.