The United States Mint’s America the Beautiful collection is without question the most diverse silver bullion option from the nation’s sovereign mint. Each new year brings five different designs to the series, and as the ATB collection rolls into its ninth year of availability, you can expect to see some of the most breathtaking natural landmarks in the country on display in the series.

For 2018, the America the Beautiful collection starts with a tour of the states that ring the western edge of the Great Lakes Region. The states featured, in order, include Michigan, Wisconsin, and Minnesota, each of which shares shoreline along a singular lake: Lake Superior. Other design issues slated for release in the 2018 ATB Collection include a national seashore in the state of Georgia and a national wildlife refuge in Rhode Island. As the Michigan release is up first, due out February 5th from the US Mint, it’s time to take a look at the Pictured Rocks National Lakeshore design.

As with all of the coins in the America the Beautiful Series, the common obverse design is used on the 2018 5 oz ATB Pictured Rocks National Lakeshore Silver Coin. For most Americans, this is a familiar design on the coin’s obverse face as it comes from the circulation quarter used in the United States. The history behind the design is as intriguing as it is beautiful. The nation’s first president, George Washington, is captured in left-profile relief on the obverse. This portrait of Washington was created in 1932 by John Flanagan, but it was based upon a bust of the president created in 1786 by Williams Cousins. 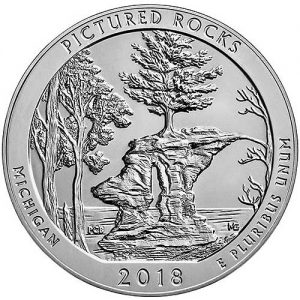 Flanagan’s design in 1932 had special timing for the United States and President Washington. At this point in US history, the Standing Liberty Quarter was in circulation. Washington was born in 1732, and in honor of his 200th birthday in 1932 the government and US Mint decided it was time the first president appear on a coin. Flanagan’s design remains on the circulation quarter today, and is the longest running coin design in American history.

On the reverse of the ATB Pictured Rocks National Lakeshore Silver Coin is the image chosen to represent the lakeshore in Michigan for the series. In a park filled with stunning view points, the location of Chapel Rock was chosen to represent the park and the state in the ATB Series. Chapel Rock offers a stunning view out over Lake Superior, and stands out in the water with a lone root bridge from a tree connecting it back to the mainland rock formations. On its craggy surface, a lone white pine tree grows from the otherwise lifeless rock.

Here are some of the highlights of this coin release for those considering the purchase of a 2018 ATB Pictured Rocks Coin:

Pictured Rocks is one of the 14 protected areas within the United States which are located on natural bodies of water. Administered by the National Park Service, there are 10 national seashores and four national lakeshores. Pictured Rocks National Lakeshore was established on October 15, 1966 after earning designation from Congress as a nationally protected region on February 17, 1965. Located near Munising, Michigan, Pictured Rocks National Lakeshore extends along 42 miles of Michigan coastline on Lake Superior and covers more than 114 square miles.

Within the park there are countless stunning views available to visitors, with most of those picturesque views coming from the hilly shoreline that exists between Munising and Grand Marais, Michigan. Many of these rock formations, including Chapel Rock, are natural archways, waters falls, and sand dunes. Although the view is picturesque, that’s not quite the reason for the park’s name.

The region is also well known for its colorful sandstone cliffs located to the northeast of Munising. Along 15 miles of coastline in this region there are colorful cliffs that reach as high as 200 feet above the lake level. The color of the cliffs comes from the high amounts of mineral found naturally in the rocks along the coastline. Known as the Munising Formation, these rocks are part of a 500-million-year-old formation known as Cambrian Period sandstone. As old as that formation is, some of the color actually comes from the Jacobsville Formation of Precambrian sandstone which the Munising Formation sits atop. The Jacobsville Formation lends a mottled red color to the sandstone and is known to be the oldest rock in the park.

About Lake Superior and the Great Lakes Chain

This isn’t the last you’ll see of Lake Superior in the 2018 ATB Series. The next release on schedule takes ATB coin fans to Apostle Islands National Lakeshore in neighboring Wisconsin, which also happens to sit on Lake Superior. In fact, of the four national lakeshores in the National Park Service, two are in Michigan and three are along Lake Superior. The name of Lake Superior came from the French word lac superieur, which translates to “upper lake.” It was given this name because it sits north of Lake Huron. Lake Superior is the largest of the Great Lakes in surface area, covering 31,699 miles. It is also the largest in terms of volume, with a water volume of 2,903 cubic miles.

In the United States, the Great Lakes Region is known as the “fourth seacoast,” behind of course the Pacific Coast, the Atlantic Coast, and the Gulf Coast regions. There are five lakes in the chain and together they account for one-fifth of the total freshwater surface on the planet. The Great Lakes are the largest body of freshwater in the world and contain nearly 6 quadrillion gallons of water. The total area of the Great Lakes is 95,160 square miles and runs 750 miles in total from east to west. In terms of square mileage, the Great Lakes are larger than the state of Texas. One final note of value, like Chapel Rock poking out of the waters of Lake Superior, there are a total of 35,000 islands that dot the Great Lakes chain. Not to disappoint in the world’s largest freshwater region, Manitoulin Island is the largest of those 35,000 islands and also holds the title as the largest island in any inland body of water on the planet!

Watch for the Rest of the 2018 ATB Collection

After Pictured Rocks is released on February 5th, the US Mint will release through November the following coins and representative parks:

The United States Mint will release the 2018 5 oz ATB Pictured Rocks National Lakeshore Coin on Monday, February 5, 2018. You can currently reserve your 2018 Pictured Rocks Coin from JM Bullion as the coin is already up for presale. Buying silver through our presale listings means you’re assured of getting your coin as soon as we receive them in stock. As always, we encourage our JM Bullion fans to connect with us on Facebook to join in the conversation and share your favorite coins with us, and follow our blog each week for exciting information on new coin releases and other industry news.