The Perth Mint offers a lot of variety to those investors who buy silver on an annual basis. The mint offers investment-grade silver coins from its Silver Kookaburra, Silver Koala, and Silver Kangaroo collections each year, as well as the coins of its Lunar Series II program. When it comes to gold coins, the Perth Mint’s primary offering is one that stands as the longest-running program in the mint’s catalog at this point in time. Introduced in 1986 with 1987 date marks, the Australian Gold Kangaroo program garners immense interest among investors each year as the singular gold bullion coin offered by the Perth Mint with regularity. For a 33rd consecutive year, the Perth Mint offers the Australian Gold Kangaroo to investors with yet another new design to keep the tradition alive. 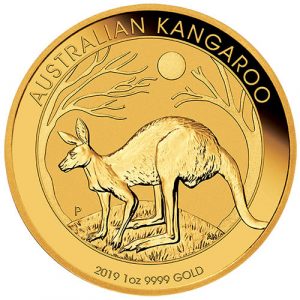 Beginning in 1990, the Perth Mint changed the program to the Australian Gold Kangaroo. The move was meant to lend wider popularity and relatability to the series. Investors were also presented with the Australian Silver Kookaburra in 1990. This one-two punch from the mint served as the foundation of a variety of collections that have since sprung up featuring native species from the Australian continent. The kangaroo, endemic to Australia and the world’s largest living marsupial, was an excellent choice for the new gold coins for sale.

In every year since 1990, the Perth Mint has changed the reverse design of the Australian Gold Kangaroo in the same way it has done with the Silver Kookaburra and other subsequent bullion collections. Over the years, designs have included the red kangaroo subspecies, both western and eastern grey kangaroos, nailtailed wallabies, whiptail wallabies, and even the common wallaroo. There has been one exception to this rule. The 1 kilo version of the coin traditionally uses the red kangaroo image featured on the copper penny from the 1950s.

On the reverse of the 2019 Australian Gold Kangaroo, you’ll find yet another new design for the series. This year’s design includes the image of a kangaroo standing on a mound of dirt and grass in the center of the design field. The kangaroo is flanked on either side by stylized trees that bend with the curve of the design field. You can also see the sun rising into the sky in the background. For the first time since 1998, there is a new obverse design for the 2019 Australian Gold Kangaroo as well.

Packaging and Availability of the Australian Gold Kangaroo

In keeping with year’s passed, the 2019 Australian Gold Kangaroo coin has five options available to investors. The primary gold bullion options include the 1 oz gold coin, 1/2 oz, 1/4 oz, and 1/10 oz coins. All four of these weights date back to the 1987 Australian Gold Nuggets. There is also a 1 Kilo Gold Kangaroo available this year, a weight which debuted in 1991. Each coin has .9999 pure gold content and a nominal face value in Australian dollars (AUD) backed by the federal government of Australia. The packaging options for each coin include:

The Perth Mint has established mintage caps on each of the fractional weights in the series for 2019, while leaving the 1 oz and 1 kilo coins with an unlimited mintage. The fractional coins have mintage figures of 200,000 for the 1/10 oz coin, 150,000 for the 1/4 oz coin, and 100,000 for the 1/2 oz coin. The unlimited mintage of the 1 oz and 1 Kilo coins means only that the Perth Mint will strike the coins continuously for 12 months to match demand, but will cease production once 12 months has been reached.

The 2019 Australian Gold Kangaroos are now available to you for purchase online from JM Bullion. The coins are a recent arrival at JM Bullion and aren’t likely to last for long, so there’s no time to waste in grabbing the latest gold bullion coin in this beautiful collection. If you have questions as you look to buy gold, just give us a call at 800-276-6508. You can also chat with us live online or send us an email with your inquiries. Don’t forget to check back each week to catch our latest blog post and follow us on Facebook for daily updates and informative posts regarding new products.