The Perth Mint is known for much more than its annual silver bullion coin releases. Its beautiful bullion coin collections offer images of the various native animals from the Australian continent in different reliefs each year, but that is not where the Perth Mint’s design prowess ends. The mint also offers a wide range of collectible bullion and proof coins with stunning designs and low mintage figures. Among its latest offerings is the Perth Mint Marvel Series of silver bullion coins. This program debuted in 2017 and recently enjoyed a reissue from the mint with protective shipping cards bearing full-color artwork. Learn more about this limited release now! 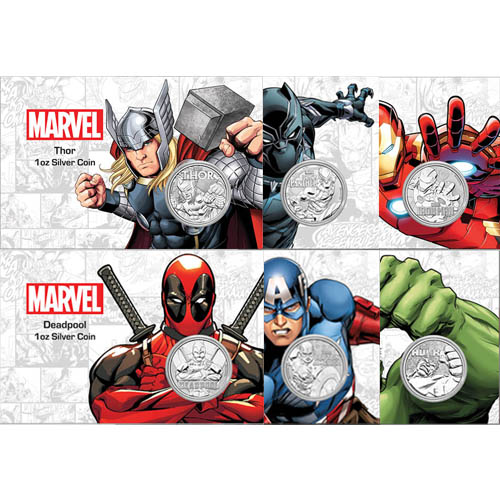 The original coin designs released in the Marvel Series collection launched in 2017 from the Perth Mint with the Spiderman design. The coins were issued with individual capsules, rolls of 20, and boxes of 100 or 300 coins. The maximum mintage from the series included 50,000 coins in total for each of the designs in the series. From that original mintage of 50,000 coins, the Perth Mint has repackaged 1,000 of the coins from each design in the collection.

The Perth Mint repackaged 1,000 of each of the coin designs for individual purchase inside of the colorful cards. However, you also have the option of purchasing all six of the coins in this limited issue as part of a six-coin Marvel Series card set. The set, like the individual cards, has a limited mintage of just 1,000 sets. All of the coins in this collection are available with 1 Troy oz of .9999 pure silver and are available in Brilliant Uncirculated condition.

The Marvel Series silver coins with unique card packaging are now available to purchase from JM Bullion. You can contact us on the phone at 800-276-6508, chat with us live online, or simply send us an email. Don’t forget to check back in with our blog on Fridays for the latest on new releases or follow us on Facebook for daily updates and weekly contests.