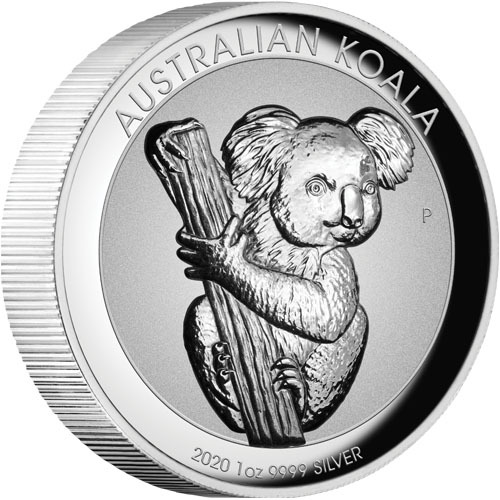 The reverse face of the new 2020 1 oz Australian Silver Incuse Koala Coin features the latest design of the koala in the series. Often inaccurately referred to as the koala bear, the koala is actually a species of marsupial that is endemic to the Australian continent. The only extant member of its scientific family, the closest living relative of the koala is the wombat. The creatures have been depicted in cave art and mythological tales of indigenous Australians for more than a thousand years.

For the new 2020 Australian Silver Koala design, the marsupial is featured climbing the trunk of a tree. Its sharp claws give it the power to clutch onto tree branches and trunks as it climbs. The large, fluffy ears and distinctive nose of the koala are captured beautifully in this design. Inscriptions on this face of the coin include the date of issue, weight, purity, and metal content, as well as the “P” mint mark of the Perth Mint and the name of the coin series.

For just the second year, the obverse of the 2020 1 oz Australian Silver Koalas features the sixth-generation bust of Queen Elizabeth II. This impressive portrait of the Queen was created for the Royal Mint of England in 2015 by Jody Clark. Like other portraits, it was later adapted for use on Australian coins. This bust of the Queen wearing the George IV State Diadem Crown shows the monarch at the age of 89 and was first used on an Australian coin in 2018, with wider adoption across all series in 2019. This is the first bust of the Queen on Australian coins since 1966 to include her broader neckline and shoulders in the design field. Inscriptions on this face of the coin identify the monarch, nation of issue, and face value of the coin.

Details of the Release

The 2020 1 oz Australian Silver Incuse Koala Coin’s most impressive detail is its incuse strike. While traditional coin designs across BU, Proof, and High Relief versions of coins are engraved onto the surface of the coin with 3D visuals, an incuse strike is different. Rarely used by mints, an incuse strike stamps the design element into the surface of the coin. This creates a different visual effect for the design when compared to engraved 3D reliefs. The obverse design of Queen Elizabeth II retains a traditional high-relief strike with enhanced visual depth to the background field and greater 3D relief for the portrait of Her Majesty.

The Perth Mint capped the mintage of these coins at 5,000 silver pieces in total. The coins all feature 1 Troy oz of .9999 pure silver content and have a legal tender value of $1 (AUD). The coins are packaged individually inside of a classic Perth Mint display with a clear lid. The coin and case ship together inside of a blue, koala-themed shipping box with a numbered Certificate of Authenticity included.

Brief History of the Silver Koala

Get Your Incuse Koala Now at JM Bullion

The new Australian Silver Incuse Koala is now available to purchase from JM Bullion. If you have any questions about this exciting collectible piece, please feel free to contact us. JM Bullion customer service is available at 800-276-6508, online using our live chat, and via our email address. We also encourage you to read our weekly blog posts and follow us on Facebook for more information and details on upcoming releases.