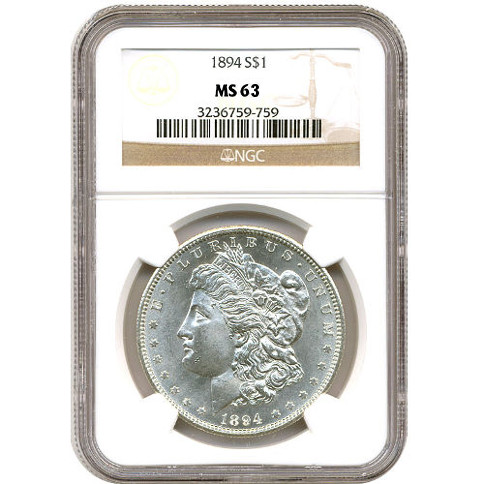 Please Note: Picture is an example only. Coins will be from years of our choice based on our current inventory, however they will always be certified by the NGC as an MS63.

There is no coin from America’s past that is more sought after than the Morgan Silver Dollar. The introduction of the coin in 1878 marked the end of a five-year ban on silver coin production in the United States and helped usher in what is considered the golden age of coin design in America.

Ironically, one of America’s most beloved coins was designed by a British man. When Henry Richard Linderman, Director of the US Mint, sought out an individual to help redesign the nation’s silver coins in 1876, he reached out across the Pond to the United Kingdom. After communicating with the Deputy Master of the Royal Mint in London, Linderman hired 30-year-old George T. Morgan. Despite his youth, Morgan had established a reputation for tremendous coin design, but there were no positions available to him at the Royal Mint at that time.

Morgan Silver Dollar Coins with an MS63 grade from the NGC possess a mint luster that may be slightly impaired. Numerous small contact marks and/or a few heavy marks are visible on the coin’s surface. Small hairlines are likely to be visible without the assistance of magnification. Detracting scuff marks or defects in the coin’s strike may be present, but in general the coin is considered above average in condition.

George Morgan put Anna Willess Williams through five sittings to perfect his profile depiction of Lady Liberty on the obverse side of the coin. The reverse side of the coin bears the image of a bald eagle clutching arrows and an olive branch. The engravings “United States of America,” “In God We Trust,” and the face value of the coin are included on this side.

If you have any questions about our NGC MS63 Morgan Silver Dollar Coins or any of our other featured products, don’t hesitate to call us at 800-276-6508. Additional support is available via live chat and email.

Joe from FL - August 25, 2017
"Well I ordered again and got five coins. I know no mix of dates is promised but I got 5 different dates this time. These are a good price and all nice coins for the grade"

Joe from FL - July 11, 2017
"I ordered 10 coins. All were nice white coins, good mint luster. If I had a negative about the order it would be the date mix. I got 5 of the 1904-O coins out of the 10 and only 4 different dates or mintmarks total. But the price was below most coin dealers and all the coins were nice for the grade."