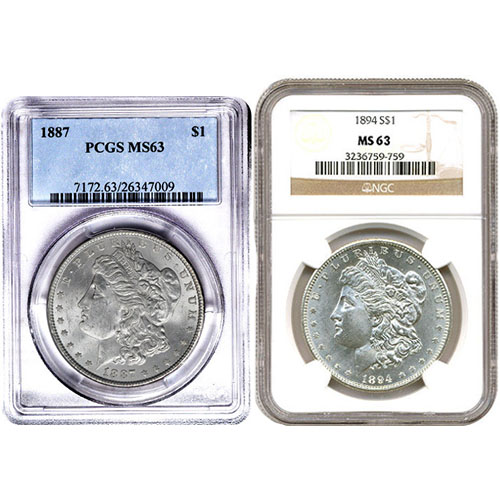 The Morgan Silver Dollar is one of the most coveted historic silver coins from the United States Mint. Introduced in 1878, this coin was maligned in its day for the quality of the design and the size of the coin, but in the 20th century collectors fell in love with this historic coin. Right now, the Morgan Silver Dollar Coin is available to purchase from JM Bullion with MS63 certification from the PCGS or NGC.

Each of the Morgan Silver Dollar Coins in this product listing are available today in Mint State 63 condition from either the NGC or PCGS. A coin with an MS63 certification from either grading house features slightly impaired luster and numerous small contact marks or signs of heavy wear. Small hairlines may be visible without magnification, and detracting scuffs or scratches may also be visible.

The Morgan Silver Dollar was introduced by the United States Mint in 1878 after undergoing two years of design by George T. Morgan. The coin was the first US silver dollar issued by the mint in five years following passage of an Act of Congress that halted the free coining of silver and ended the use of the Seated Liberty design on silver dollars.

Morgan Silver Dollars were in circulation from 1878 to 1904 in the United States, when another bill was passed that halted the production of silver dollars. The silver dollar would not return to circulation in the US until 1921, well after World War I’s conclusion. The Morgan design was resurrected, but used only for a portion of 1921 and replaced by the Peace Silver Dollar.

On the obverse of all Morgan Silver Dollar coins is the left-profile portrait image of Lady Liberty. Morgan sat through numerous portrait sessions with Anna Willess Williams to get his depiction of Liberty just right for the obverse, and added 13 stars around her head and the year of issue at the base of her bust.

The reverse of all Morgan Silver Dollars features the image of the heraldic eagle of America. The bald eagle is depicted clutching arrows in one talon and an olive branch in the other. Featured engravings include “United States of America” and the face value of the coin.

In this product listing you are guaranteed to receive a Morgan Silver Dollar coin with a Mint State 63 grade. We cannot guarantee which certification house, NGC or PCGS, your coin will come from, but do guarantee these coins come from the original production run of 1878 to 1904.

If you have any questions, please feel free to reach out to JM Bullion. Our customer service team is available on the phone at 800-276-6508, online using our live chat, or via our email address.