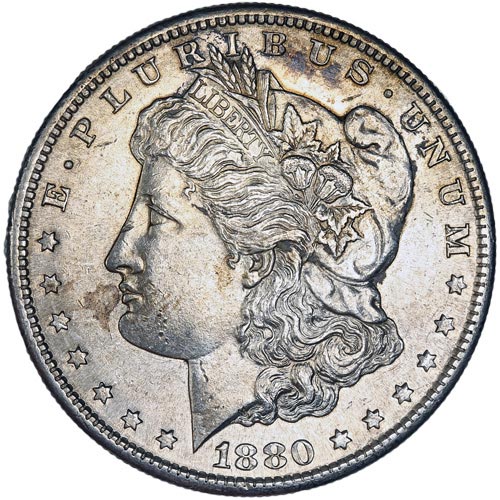 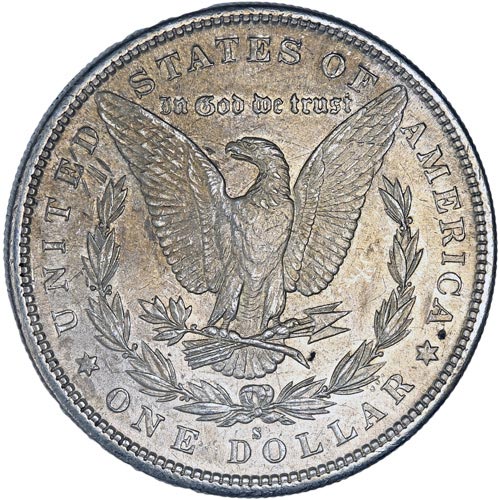 The Morgan Silver Dollar is available in AU (Almost Uncirculated) condition. These coins have been struck in 90% pure silver and contain a total of .7734 troy ounces of the metal. The AU Morgan Silver Dollar is offered from years of our choice, all of which will be from 1878-1904. Coins in Almost Uncirculated condition show a small amount of wear which is visible only on the highest points of the design.

The Morgan Silver Dollar is one of the most sought-after coins among collectors in the United States. The coin was first minted in 1878 at a time when a battle between the mining industry and the US Treasury put the production of silver coins in jeopardy. When the Morgan Silver Dollar was first introduced, it was designed to replace the Seated Liberty Dollar which had ceased production following the Coinage Act of 1873.

The passage of the Coinage Act of 1873 put an end to the free coining of silver, a system which required the US Mint to accept all silver presented to it by mining groups and return it, struck into coin. Passage of that bill put an end to the Seated Liberty Dollar coin, but the Bland-Allison Act required the Treasury to purchase certain amounts of silver each month to mint into coins, but was later repealed by the Sherman Silver Purchase Act.

George T. Morgan, then the Assistant Engraver at the US Mint, was responsible for the designs featured on the Morgan Silver Dollar. On one side of the coin, he created a left-profile portrait of Lady Liberty. On the opposite side, he created an image of the bald eagle. Morgan Silver Dollars were produced from 1878 to 1904 and then once again in 1921. All silver purchased by the Treasury under the Sherman Silver Purchase Act was to be produced into coins until the supply was depleted, which occurred in 1904. There was a special, one-year minting of Morgan Silver Dollars in 1921.

The image of Lady Liberty, as designed by Morgan, was engraved on the obverse side of the silver dollar coins. Above her head, the phrase E Pluribus Unum was engraved, while below her head the year of minting was included. On the reverse side, the image of a bald eagle with outstretched wings was engraved. The eagle held an olive branch in one talon and arrows in the other. The phrase United States of America was engraved over its head, with the phrase One Dollar included below.

Morgan Silver Dollar coins were produced at various facilities in the US Mint System. The Philadelphia, Carson City, San Francisco, New Orleans, and Denver Mints all played a role in producing the silver dollar coins. Today, these Morgan Silver Dollars are available to collectors in Almost Uncirculated condition.