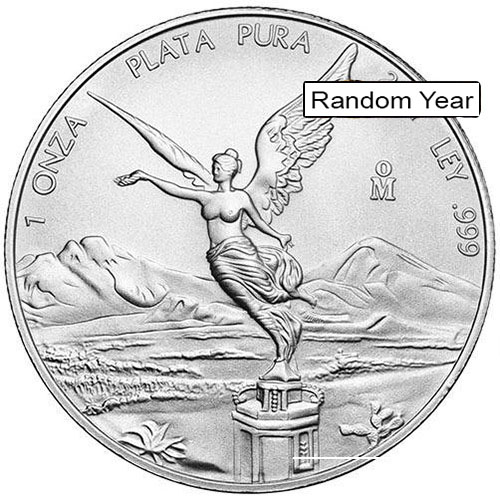 The Mexican Silver Libertad is not the most well-known coin in the world, but many argue that this simply adds to its allure. Lower mintages have only helped to drive demand for this coin that many would consider to be relatively scarce when compared to other common world coins. Minted in its native land of Mexico by one of the oldest mints in the entire world, the Libertad has picked up a sizable following over the years since its original introduction.

There are two different primary designs that have graced the reverse side of the Mexican Libertad. The Winged Victoria of Mexican Independence Victory Colum occupied one side of the coin for much of the production. This side of the coin is easily identifiable by the volcanoes Popcatepetl and Iztaccihuati that share in the design This did not stay in place, however, and the design was eventually replaced by a new depiction of the Winged Victoria, with the notable design difference being an alteration of the displayed angle. The original design was used from 1982 to 1995, with the new design introduced in 1996 and remaining in use into the 21st century.

The obverse side of the coin is not quite as dynamic given the rather simple design. This side features the Mexican Coat of Arms. If there is one thing that most owners can tell from a Libertad, it is that the Mexican culture is quite obvious with each section of the coin. The coat of arms includes 11 total images, with one primary being centered in the middle and 10 secondary surrounding in a circle.

The Silver Libertad Series was first started in 1982, outdating many other coins that have come along since this time. The first run of production included only 1 oz. coins, and the total number released was just about 1 million. In 1996 the Mexican Mint expanded their line of silver coins to include 2 oz. and 5 oz. editions as well. These coins are not nearly as abundant as their 1 oz. counterparts, however, with just 50,000 and 20,000 coins being produced respectively.

Production continued to tail off for the 2 oz. and 5 oz. coins until 2007 when it was suddenly increased, breaking a pattern that was set by the prior several years. Again in 2008 and 2009 the mint released even higher quantities of these coins. Surprisingly, however, the standard 1 oz. silver Libertads still remained at about 1,000,000 coins minted annually.

To this day, Mexico regularly lags behind in terms of the amount of coins that are created and distributed. Where the United States and Canada mint closer to 10,000,000 or even more coins per year, the Libertad has never gone over 2.5 million (1992). Look for this trend to continue and keep in mind that it only adds to its inherent scarcity.

If you do not live in Mexico, you will likely find that this coin is pretty difficult to come across. Online ordering is going to be most effective because it is not as widely available as most other coins. The Libertad is in line with all of the other coins from both North America and around the world, making it a premier choice for both collectors and investors.