Mark the Queens Platinum Jubilee with a Beautiful Silver Coin

Leave it to Perth Mint to come up with some of the most beautiful silver coins for sale each year. The collection of silver bullion at Perth Mint is already well-known, from its Silver Kookaburra, Silver Koala, and Silver Kangaroo collections, to its variety of annual commemorative coins. 2022 marks the historic Platinum Jubilee for England’s Queen Elizabeth II. In honor of the Queen’s 70 years on the throne, the Western Australia-based mint offers a new Perth proof silver coin for collectors, historians, and fans of the monarchy. 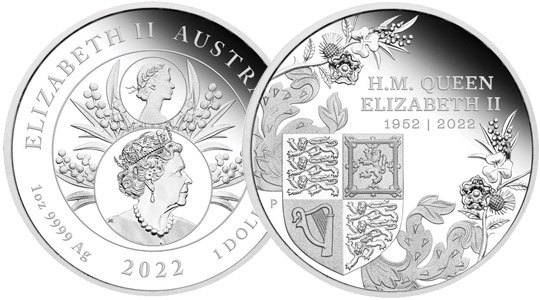 On the obverse side of the 2022 1 oz Proof Australian Silver Queen’s Platinum Jubilee Coin, you will find not one, but two portraits of Queen Elizabeth II. Her Majesty ascended to the throne of England in 1952, and the first portrait of the Queen to grace British coinage is revived for use in this commemorative release. At the top of the design field, you will find the first-generation portrait of Queen Elizabeth II used on British coins from 1952 to 1963. This bust of Her Majesty is the only one of her reign to feature a laurel wreath crown rather than a piece from Her Majesty’s jewels or the Crown Jewels. Beneath it, you will find the latest sixth-generation design from Jody Clark. This portrait captures the Queen at the age of 89 wearing the George IV State Diadem Crown.

The reverse face of 2022 Proof Australian Silver Queen’s Platinum Jubilee Coins is the Royal Arms. The coat of arms of the monarchy consists of a spade-shaped, quartered shield. This shield features the coat of arms for England, Scotland, and Northern Ireland. The symbols include the Three Lions of England in the first and fourth quadrants. The Lion of Scotland is in the second quadrant and a harp is in the third.

In keeping with the Perth Mint’s reputation, these coins are exceptionally packaged for perfect presentation. Each coin comes with a classic black display boasting an acrylic lid. The coin and display are packaged in a themed shipper that includes a Certificate of Authenticity. Each coin has beautiful proof visuals delivering frosted designs and mirrored fields. Perth Mint has capped production of these coins at 5,000 in total.

As mentioned earlier, Queen Elizabeth II ascended to the throne of England in February 1952 when her father, King George VI, died. What has happened since has been nothing short of historic. Just 25 years old when she ascended to the throne, she provided a guiding hand as the United Kingdom went through countless rounds of independence movements with former colonies, saw the nation through the Cold War, and provided stability and calm as the world around us all changed. She has lived to mark her Silver, Golden, Diamond, and Platinum Jubilees over the course of her reign. She is now the longest-living and longest-reigning monarch in British history. Most significantly, Queen Elizabeth II is the only British monarch to have celebrated a Platinum Jubilee.

These coins are one of the perfect ways to celebrate the reign of Queen Elizabeth II and mark it for decades to come. JM Bullion customer service is available to assist you at 800-276-6508, online using our live chat, and via our email address. You can also follow us on Facebook and read our weekly blogs for more information on our products.