Commemorative silver for sale is often created to mark important occasions, whether it is in celebration of national anniversary or a significant accomplishment by an individual or group. In 2019, countless refiners in the United States are offering Apollo 11 coins with designs honoring the 50th anniversary of one of the most important achievements for mankind in the 20th century. In July 1969, NASA achieved a decade-long goal set forth in 1961 by President John F. Kennedy to send a man to the moon and return him safely to Earth. It’s been 50 years since the world tuned in to witness that moment on TV and now silver and gold collectors have rounds and coins available to mark the occasion. Learn about the selection of Apollo 11-themed coins and rounds now available for purchase through JM Bullion. 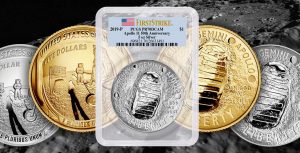 It comes as no surprise that the leading coin program marking the Apollo 11 anniversary is offered by the United States Mint. The series from the US Mint includes five primary options that boasts 1 oz uncirculated, 1 oz proof, and 5 oz proof silver coins. The series also features two $5 (USD) gold coins. All of the coins from the US Mint are curved specimens with a convex reverse and a concave obverse side.

On the obverse is the image of an astronaut’s footprint in the sunken, concave side of the coin. The reverse, convex side boasts the depiction of a photograph taken of Buzz Aldrin in which you can see the reflection on his visor of Neil Armstrong, the Eagle lunar lander, and an American flag all on the surface of the moon.

There are various silver round options available. Some are available as singular products while others are part of robust series. Examples of this include silver rounds from SilverTowne and the North American Mint. SilverTowne offers a singular issue with the image of the Eagle lunar lander as the primary design element.

The North American Mint opted for an extremely robust series of silver rounds that includes a total of eight designs. All of the rounds share a common reverse based on the Apollo 11 mission patch depicting an American bald eagle landing on the moon with an olive branch in its talons. The obverse of each of the eight silver rounds captures a different moment in the 8-day mission from liftoff to lunar landing to splash down in the Pacific Ocean. Each release has a limited mintage of 5,000 rounds and is presented in an Air-Tite capsule.

In 1957, the Soviet Union landed the first major blow in the Space Race during the Cold War. The Soviets launched the first successful satellite into space when Sputnik began orbiting around the planet. The Soviets later beat America to the punch again by sending the first human safely into space and bringing him home. In response to a nervous nation, President John F. Kennedy laid out a national goal in challenging the country to use its resources to send a man to the moon and return him safely to Earth.

With the decade running out, on July 16, 1969, NASA’s Apollo 11 spacecraft lifted off from Kennedy Space Center on Merritt Island, Florida. The mission was simple: get to the moon and come home. The three-man crew included Michael Collins, Buzz Aldrin, and Neil Armstrong. The men embarked on an eight-day mission that saw Aldrin, the lunar lander pilot, and Armstrong, mission commander, descend to the moon’s surface. Aldrin and Armstrong spent a total of 21.5 hours on the moon’s surface.

The duo explored the surface in the Sea of Tranquility, planted an American flag, and collected samples of lunar rock from the surface. After their time was up, the pair reconnected with Collins in the command module and began the trip home to Earth. The three men splashed down in their capsule in the South Pacific Ocean on July 24, 1969, and were met by a US Navy recovery team.

If you have any questions about the Apollo 11 coins and rounds available from JM Bullion, please feel free to reach out to us at 800-276-6508, chat with us live online, or simply send us an email. You can also follow us on Facebook to learn when each of these new programs is available to buy. We also encourage you to follow our blog each week for exciting information on upcoming releases.