NASA marked two very different 50-year anniversaries in recent years. Several 2019-dated coins debuted last summer celebrating the 50th anniversary of the Apollo 11 mission that successfully sent human beings to the Moon and returned them safely to Earth. 2020 arrives with a different 50th-anniversary release that highlights failure, on one hand, as well as the remarkable ability of NASA engineers to adapt on the fly and save lives from thousands of miles away. A new ultra-high-relief release Pobjoy Mint silver bullion coin is now available at JM Bullion. 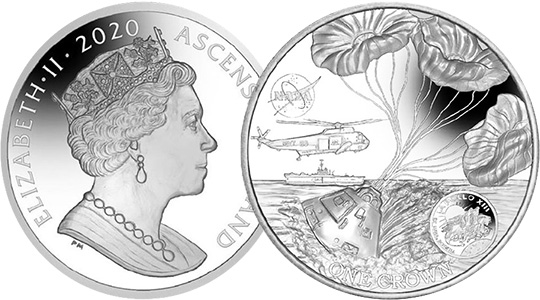 The obverse design of the 2020 2 oz 50th Anniversary of Apollo 13 Silver Coin features the Pobjoy Mint’s distinctive portrait of Queen Elizabeth II. This bust of Her Majesty depicts the Queen with the George IV State Diadem Crown on her head while wearing Royal earrings and a necklace. The bust of the Queen is surrounded by inscriptions with her name, the date of issue, and the nation of issue.

On the reverse face of 2020 2 oz 50th Anniversary of Apollo 13 Silver Coins is an image of the splashdown in the South Pacific of the Apollo 13 capsule. After averting disaster in space, the three-man crew of Apollo 13 was able to re-enter Earth’s atmosphere and safely splashdown in the South Pacific like so many missions before. The design element shows the capsule in the foreground with its parachutes deployed to cushion its landing in the water. The Apollo 13 mission patch and NASA logo feature in small circular insets in the design field, with a US Navy helicopter visible in the middle ground and its launch, the USS Iwo Jima, in the distant background.

The 2020 2 oz 50th Anniversary of Apollo 13 Silver Coins are ultra-high-relief strikes by the Pobjoy Mint. Such coins are struck multiple times during the coining process under immense pressure to create visual depth to the field and deliver greater details in the design elements. The Pobjoy Mint limited the release of these coins to just 650 specimens in total. Each one is housed individually inside of a black Pobjoy Mint presentation box that includes an Apollo 13-themed Certificate of Authenticity with purchase.

Apollo 13 launched from Kennedy Space Center on April 11, 1970. The mission was to be the third in the Apollo space program to land on the moon and was the seventh crewed mission in the program. However, two days into the mission it suffered a critical failure. When running a routine stir of the oxygen tanks on the service module, a small explosion occurred that vented the contents of the tank into space. NASA engineers worked closely with the astronauts on board to device a workaround to create oxygen and remove carbon dioxide from the air. The three men suffered a harrowing experience that included several days inside of the cold, damp cabin of the lunar module. The mission to land on the Moon was aborted and the crew used the Moon’s gravitational pull to loop around the darkside of the Moon and put the craft back on course to Earth without using excess power.

On April 17, 1970, the men splashed down in the South Pacific. Though the mission had failed in its primary objective, it did showcase the ingenuity of America’s space program to rescue astronauts from thousands of miles away and avert a national disaster in the process.

The new 2020 2 oz 50th Anniversary of Apollo 13 Silver Coins are in short supply and will likely experience great demand as a collectible piece. If you have any questions, please contact JM Bullion at 800-276-6508, chat with us live online, or email us. Don’t forget to read our weekly blog posts and follow us on Facebook for exciting spot price contests and other regular updates.