Arguably among the world’s best-selling bullion coin series, the Chinese Panda Series from the Chinese Mint is a popular choice with investors. Introduced in 1982 with gold bullion coins, the series is traditional in some senses, offering the same weight options as other major bullion collections, and groundbreaking in other areas. As the 2021 Chinese Panda designs begin to circulate, now’s a great time to take a closer look at the series as a whole. 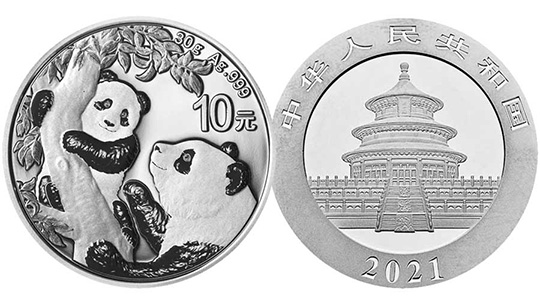 The Chinese Panda bullion coins always feature the Giant Panda on one side of the coin, with the Hall of Prayer for Abundant Harvests on the other side. While one of these designs, the Hall of Prayer for Abundant Harvests, remains the same each year, the other design changes each year. The Chinese Mint features a new depiction of the Giant Panda species on the coins each year. For the 2021 Chinese Panda Coins, the Giant Panda image depicts a mother with her young cub. In the design, the mother is shown standing with her front paws on the trunk of a tree as her young cub climbs up the trunk. One of the mother’s paws is just behind her cub, offering a bit of support as the young panda explores its freedoms and ability.

When it comes to the other side of the coin, the Hall of Prayer for Abundant Harvests once again features on the coins. The Hall of Prayer for Abundant Harvests is the central building within the Temple of Heaven Complex and is shown with its exterior façade on Chinese Panda coins for all issues dating back to the 1982 debut of the gold bullion coins.

History of the Designs

The designs on the obverse and reverse fields of 2021 Chinese Pandas are rooted in national symbolism and the pride of the nation’s ancient architecture. The Giant Panda is a distinctive species of bear native to the south-central highlands of China that is known for its large, black patches of fur on the eyes and ears, with white fur dominating most of its torso. The Chinese Mint made the Chinese Panda bullion series the first in the world to use new designs on one or both sides when it launched the series in 1982. The Giant Panda is captured in a new design element each year on the coins, with only the 2002 coin featuring a repeat design. After backlash at the reuse of the 2001 design, the Chinese Mint went back to issuing new images on the coins each year.

As of 2016, all of the coins in the Chinese Panda Series feature weights in Grams rather than Troy ounces. The collection has its same primary bullion options, with a single silver coin available in a 30 Gram weight and five gold coins in weights of 30 Grams, 15 Grams, 8 Grams, 3 Grams, and 1 Gram. In addition to these options, there are popular collectible versions of the BU coins that have been enhanced by third-party dealers like Emporium-Hamburg. These options include:

Investing in and Collecting Chinese Pandas with JM Bullion

Whatever Chinese Panda coin you prefer, 2021 once again offers a beautiful new Giant Panda image across a wide range of products from the Chinese Mint. If you have any questions, please feel free to ask. JM Bullion customer service is available on the phone at 800-276-6508, online using our live chat, and through our email address. You can follow our weekly blog posts for more insight on new and upcoming releases and follow us on Facebook for daily posts and weekly opportunities at spot price contests.