The official Royal Arms of England dates back to 1198 and its Three Lions design has been in use consistently by monarchs of the United Kingdom in the subsequent 820 years. The first official Royal Arms of England was adopted in 1198 near the end of King Richard I’s reign as King of England. His design has become synonymous with the throne of England and is the feature design element in an exciting new series of silver and gold bullion coins from the Scottsdale Mint and Gibraltar. 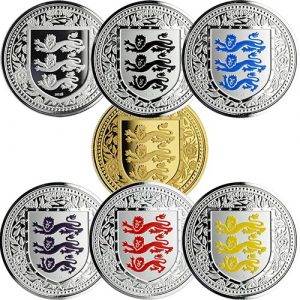 In the new series from the Scottsdale Mint, the Royal Arms of England appears on coins issued for the British territory of Gibraltar. The series includes a total of three bullion coins and seven colorized reverse proof coins. Included in the series are 1 oz silver coins, 1 oz gold coins, and 1/5 oz gold coins in a bullion version. The colorized reverse proof coins are available in 1 oz silver and 1 oz gold.

The varying coins in the new Royal Arms of England Gibraltar Series have unique mintage figures and all share the same design. Mintage details are listed here:

Each of the Royal Arms of England coins has a face value in Sterling pounds (GBP) backed by Gibraltar. The gold coins feature .9999 pure gold content while the silver coins have .999 pure silver content. Finally, the colorization added to the gold and silver reverse proofs is limited to the Three Lions design on the Royal Arms.

Design of the Royal Arms of England Gibraltar Coins

The silver and gold coins for sale in this series all share the same obverse and reverse design elements. The Scottsdale Mint reached into the history of Royal Mint effigies of Queen Elizabeth II to feature the third-generation portrait of Her Majesty. Designed in 1984 by Raphael Maklouf, the third-generation right-profile portrait of Queen Elizabeth II depicts the Queen wearing the Royal Diadem crown and is widely regarded as an ornate depiction of the monarch. This side of the coins includes engravings of “Elizabeth II,” “DEI GRA REGINA,” “Gibraltar,” and the distinct face value, weight, purity, and metal content of the coins.

On the reverse side of Royal Arms of England Gibraltar Coins, you’ll find a unique Royal Arms of England design crafted by Scottsdale Mint. The official shield adopted during the reign of King Richard I includes three lions stacked vertically in the passant guardant pose. This symbol became synonymous with Richard I and was used without change for nearly 200 years until the reign of King Edward III. In the background field of the design, you’ll notice vines encircling the shield with roses.

The roses are a reference to the Wars of the Roses in the late 15th century. The House of York, a cadet house of the Plantagenets of which Richard I was a ruling king, lost control of the throne of England to King Henry VII, founder of the House of Tudor. The roses depicted here in the background are known as Tudor roses.

History of the Royal Arms of England

The Three Lions shield of King Richard I, better known as Richard the Lionheart, is the first Royal Arms officially recognized in the nation’s history. Richard I reigned from 1189 to 1199 and his Royal Arms of England was adopted in 1198 near the end of his reign. The inclusion of three lions in his design was a change from previous examples of lions on personal arms in England prior to Richard I’s reign.

The first recorded use of lions in a personal coat of arms or shield came in 1128. In that year, King Henry I of England made his son-in-law Geoffrey Plantagenet, the Count of Anjou, a knight. In the process, he gifted him a gold lion badge. Geoffrey Plantagenet’s son Henry would go on to become King Henry II of England in 1154 when the House of Plantagenet claimed the English throne through Geoffrey’s marriage to Matilda, Henry I’s daughter. King Richard I was a son of Henry II and just the second of 14 kings from the House of Plantagenet to rule over England during the next 331 years.

Gibraltar is a diminutive strip of land that juts out from the southern tip of the Iberian Peninsula into the Mediterranean Sea. Just 2.6 square miles of land exist here and most of its 32,000 residents live in a single city at the base of the Rock of Gibraltar, a limestone monolith that stretches some 1,398 feet into the sky. During the height of Ancient Greece, the Rock of Gibraltar was believed to mark the end of the known world.

Today, Gibraltar is one of 14 remaining British Overseas Territories under the jurisdiction and sovereignty of the United Kingdom. All territories are remnants of the British Empire and have not been granted independence, or in the case of Gibraltar, have voted against independence (several times). Gibraltar was seized from Spain by a combined Anglo-Dutch force in 1704 during the Wars of the Spanish Succession. The land was officially ceded to Britain in the Treaty of Utrecht in 1713.

This exciting new collection of coins from Gibraltar and the Scottsdale Mint is available to you from JM Bullion. You can call us at 800-267-6508 if you have any questions, chat with us live online, or simply email us with your inquiries. Don’t forget to follow us on Facebook and check in with our blog each week for exciting information on current and upcoming coin releases.