It’s been nearly a decade since the last major feature film release of the Harry Potter franchise, and even longer since the final book was issued by J.K. Rowling, but the franchise remains as popular as ever with its fans. Precious metals enthusiasts who are also fascinated with the wizarding world have had the joy of seeing several new gold and silver bullion programs debut in 2020. Now, a new collection Harry Potter silver coins is available with the house crests of each house at Hogwarts School of Witchcraft and Wizardry. Learn about the new five-coin release of Harry Potter House Crest Coins coming soon from JM Bullion. 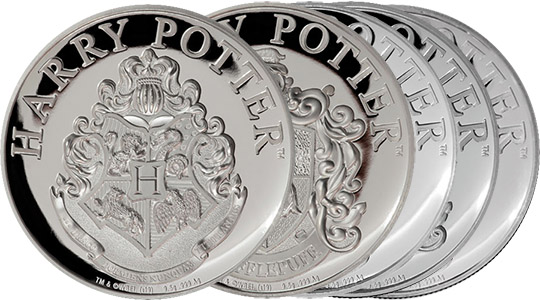 Details of the New Series

The new series of Harry Potter House Crest Coins includes five distinctive designs on 9.5 Gram .999 pure silver coins. Each piece is a proof specimen with frosted designs and mirrored background fields. At 9.5 Grams, the coins each offer .3054 Troy oz of pure silver. The individual coins have separate reverse designs with one common element on this side: an inscription of “Harry Potter” above the crest.

On the obverse of each coin is a distinctive effigy of Queen Elizabeth II. The effigy depicts the Queen in right-profile relief wearing the George IV State Diadem Crown. The Queen is surrounded by inscriptions of her name, the date of issue, face value, and nation of issue. For the record, the coins are issued with a 1 Pound sterling face value on behalf of Gibraltar, a British Overseas Territory at the southern tip of the Iberian Peninsula.

The series includes designs for Hogwarts School of Witchcraft and Wizardry, and its four individual houses: Gryffindor, Slytherin, Hufflepuff, and Ravenclaw. Each design is limited to a mintage of just 10,000 silver coins and comes with a unique package.

Each individual card is packaged inside of a presentation card that features a full-color design of the house animal aligned with the reverse view of the coin. The other side of the presentation card has the motto of the individual house, Certificate of Authenticity information for the release, and a unique serial number.

The one release with images of all four houses on it is the 2020 British School Crest of Wizardry Hogwarts Silver coin. The design on the reverse of this release has the image of the Hogwarts School of Witchcraft and Wizardry crest. The quartered crest has an “H” in the center for Hogwarts and features the individual house crests for each of the four student houses in its quadrants. In the first quadrant is the Lion of Gryffindor. The second quadrant has the Snake of Slytherin. The third quadrant has the Badger of Hufflepuff and the fourth quadrant the Raven of Ravenclaw. A banner below it reads “Draco Dormiens Nunquam Titillandus,” which translates as “Never Tickle a Sleeping Dragon.”

If Gryffindor is a symbol of light and good, House Slytherin is a beacon of darkness and treachery. Founded by Salazar Slytherin, the crest for House Slytherin depicts a devious snake coiled up with its head raised on a crest that is otherwise similar in appearance to that of Gryffindor with a knight’s helmet at the top and a banner below bearing the house name, in this case, “Slytherin.”  Each coin design does have the animal from the crest depicted again atop of the knight’s helmet. Salazar Slytherin believed in preserving the pure blood of magic, and thus, though that only pure-blood witches and wizards should be allowed to learn witchcraft and magic. The sorting hat chose students for Slytherin who display cunning, self-preservation, and lineage among their personal character traits. The primary antagonist student in the series, Draco Malfoy, is a member of House Slytherin.

One of the two lesser-mentioned houses in the feature films, and in the fictional novel series, House Hufflepuff has a crest that bears the image of a badger on the same shield design featured in the other releases. Again, the banner at the bottom is the primary variation on this face with “Hufflepuff” inscribed and a badger atop the knight’s helmet. Helga Hufflepuff founded this house for students who are hard-working, loyal, friendly, and honest. The house is known for its tolerance and kindness towards others.

Finally, there is House Ravenclaw. The House Ravenclaw crest design offers an image of a raven on a tree branch on the shield in the crest. The knight’s helmet is topped by the head of a bird and “Ravenclaw” is inscribed on the banner beneath the crest. Rowena Ravenclaw was the founder of this house and prized students with wisdom, wit, and intellect. Above all, she prized students with a desire to learn.

With limited mintage figures, the School Crest of Wizardry coins are sure to sell quickly as other collections did. For answers to your questions, please contact JM Bullion customer service at 800-276-6508. You can chat with us live online or simply send us an email as well. Don’t forget to follow us on Facebook and check for our weekly blog posts.