The phoenix is one of the best-known mythological creatures in human history. Now, KOMSCO has a new silver bullion issue honoring the phoenix and its position in both Korean history and its modern-day government. A prominent symbol, the phoenix now features in the new 2020 1 oz South Korean Silver Phoenix release from KOMSCO. Learn all about these new coins and the background of the phoenix in Korean culture. 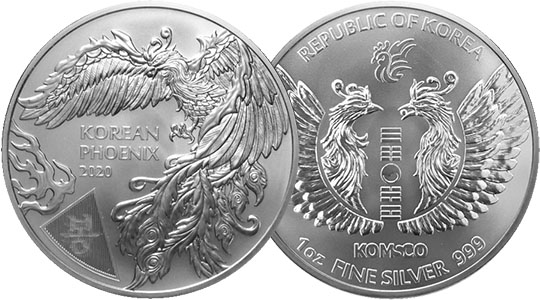 In the new 2020 1 oz South Korean Silver Phoenix release, KOMSCO depicts the beautiful, powerful bird of mythology. The bird is shown with its wings swooping around its figures as it seemingly hovers in flight before landing. It has beautiful, ornate feathers on its head and long, flowing tail feathers that wind down below its figure. There is a flame bursting in the lower-left field of the design element, a symbol of the spontaneous combustion that brings the bird new life in its lifecycle. The lower-left field of the coin includes a new security feature from KOMSCO.

Rather than using polishes and finishes to create a security feature, KOMSCO introduces a new security feature that is actually inscribed directly onto the coin’s surface. As you change the viewing angle, the letters from the Hangul (the Korean alphabet) that spell out Bong Hwang, the name for the phoenix in the Korean language. Inscriptions on this face of the medal include “Korean,” “Phoenix,” and “2020.”

The reverse side of these silver coins for sale offers a new design element for KOMSCO. There are a total of three depictions of the phoenix on this side. At the very center of the design element is the Taeguk, the official emblem of the Republic of Korea. This is flanked on either side by a phoenix in side-profile relief with large, swooping stylized wings that flair out toward the edges of the design element. Above this symbol is another stylized phoenix. Inscriptions on this face of the medal read “Republic of Korea,” “KOMSCO,” and “1 oz Fine Silver 999.”

The new 2020 South Korean Silver Phoenix is the first release of its kind from the official sovereign mint of South Korea. There is no announced mintage cap on these silver bullion specimens and all items are available in Brilliant Uncirculated condition. The medals will ship individually with a protective plastic flip, while multiples come in mint-issued tubes of 25 or boxes of 250.

Use of the Phoenix in Mythology and Korean Society

The phoenix is a mythical bird known to societies around the globe. Popular in Greek and Roman cultures of the ancient world, the phoenix was also known to ancient Korean cultures. The bird is said to have the power to cyclically regenerate itself, in essence being born again. Not surprisingly, it is not the regenerative nature of the phoenix that has left a lasting impression on human civilizations, but rather, its means of regeneration. As it reaches old age, the phoenix is said to spontaneously combust in a brilliant flash of flame and heat. The predecessor’s ashes are the foundation for the birth of a new, younger phoenix that rises in its place.

Today, the government of South Korea uses a dual-phoenix image in both the Presidential Seal and Presidential Standard. The seal and standard (flag) use the same image of two side-profile phoenixes above the rose emblem of the Republic of Korea.

Get Your 2020 Silver Phoenix at JM Bullion

The 2020 1 oz South Korean Silver Phoenix is already available to purchase online from JM Bullion and has proven popular with investors since its release. If you have any questions about the new silver medals, please contact our customer service team at 800-276-6508. You can also chat with us live online or email us. Don’t forget to follow our Facebook page and check in each week for new blog posts.