Keep Track of Time with the Chronos Coins from Tokelau

The growth of silver coins from the South Pacific continues in 2020 with Tokelau at the center of several new coin releases. From its Terra, Vivat Humanitas, and Wildlife Series to the new Chronos Series, the number of Tokelau silver coins for sale is increasing. Among these collections, the Chronos Series is one of the more unique as it started out as a silver round collection rather than a silver bullion coin. Now in its sixth year of availability, the Chronos Series delivers another impressive option for investors and collectors. 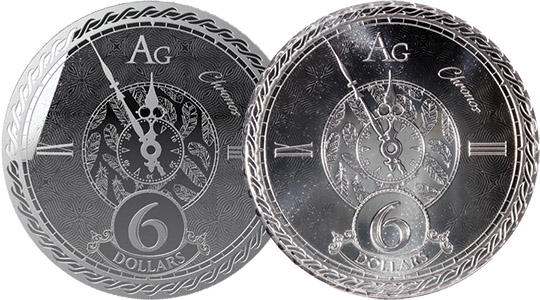 The obverse design of the 2020 1 oz Tokelau Chronos Silver Coin bears an effigy of Queen Elizabeth II. Her Majesty is shown in the popular fourth-generation British design from Ian Rank-Broadley. Created in 1998, the bust of the Queen shown here debuted in 1998 on British coins and remains in circulation in 2020, more than 20 years later, in places such as Niue, the Cook Islands, and Tokelau. The design field includes a feather twisted into the shape of the infinity symbol and comes with markings identifying the weight, metal content, purity, nation of issue, and monarch. The date mark is also found on this side and is split two digits each on either side of the Queen’s portrait.

On the reverse field of 2020 Tokelau Chronos Silver Coins, you will find a modified image of the clock that has graced the reverse of the coins in this series since 2015. Each year, the issuing mint produces the image of a clock on the reverse of the Chronos coins. This year’s design has feathers falling in the central background field between the inner workings of the clock and the primary field with the major hour marks denoted. In place of the 12-hour mark there is the periodic symbol for silver “Ag,” while Roman numerals are used for the 3-hour and 9-hour marks. The face value of “6” New Zealand dollars features as the 6-hour mark at the bottom. As with all other releases in this collection, the time is set to five-minutes to 12.

The Pressburg Mint struck the 2020 1 oz Tokelau Chronos Silver Coins in two versions: BU and Proof-like. The Proof-like coin’s beautiful visuals, including its mirrored surface finish and clearer design elements, helped it sell out quickly with its low mintage of only 10,000 silver coins. The BU version of the coin remains in stock and has a mintage double that of its proof-like counterpart at 20,000 coins in total. Each one has 1 Troy oz of .999 pure silver content and is available to you inside of protective plastic capsules.

The Tokelau Chronos Series was first issued by the Pressburg Mint in 2015 as a 1 oz silver round. The design elements have remained the same on the reverse side of the products since introduction, focusing on a clock set at five minutes to 12 with minor changes to the background elements. In 2019, the Pressburg Mint transitioned the program to a legal tender issue for the nation of Tokelau. The coins debuted a new obverse with a bust of Queen Elizabeth II and originally had a face value of $5 (NZD). These 2020 coins debuted a new face value set to $6 (NZD).

The sovereign state of Tokelau has a population of just 1,499 people spread across its three tropical coral atolls of Atafu, Nukunonu, and Fakaofo. The combined land area of the small island nation is just 4 square miles and the capital of the nation rotates yearly among the three different atolls. Created as a British protectorate in 1889, today Tokelau is a dependent territory of New Zealand. The islands hold elections every three years and its government, as well as that of New Zealand, consider the islands a sovereign state.

Building on hundreds of years of coining history in Bratislava, Slovakia, the Pressburg Mint has revived silver coining in the area after 300 years. The mint understands that silver coins have a value beyond simple face values and should deliver brilliant aesthetics and images that act as message carriers. All of its coin blanks used to strike silver coins are high-quality, LBMA Good Delivery silver blanks.

Invest in the Chronos Series with JM Bullion

With the proof-like 2020 Chronos Silver Coins already sold out, it is clear the design and brilliance of this series is popular. The BU specimens are still available and you can reach out to JM Bullion with any questions you have about this release. Our customer service team is available at 800-276-6508, online through our live chat, and via our email address. Please remember to follow us on Facebook and check back each week to read our blog posts for a more in-depth look at new releases.