On June 29, 2019, EY hosted the 2019 Entrepreneur of the Year Award ceremony at the Hilton Anatole Hotel in Dallas, Texas for the Southwest region. JM Bullion is happy to announce that our very own CEO and Founder, Michael Wittmeyer, was honored with a 2019 Entrepreneur of the Year Award for the Retail and Consumer Products category! The annual honors are awarded to leading entrepreneurs across the United States and around the world who have showcased an unstoppable drive in fueling the growth of a company, inspiring innovation in business, and contributing to the vibrancy of communities. 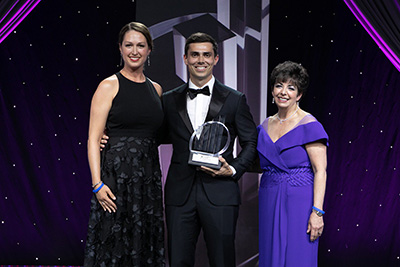 Michael co-founded JM Bullion in Lancaster, Pennsylvania, on September 30, 2011. He launched the company at a time when the precious metals industry was surging. In the eight years since, Michael has led JM through the challenges of growth and providing a guiding hand for the company as it relocated to Dallas, Texas, fulfilled its one-millionth order, earned a #1 ranking in the Dallas 100, earned a #40 ranking in the Inc. 500, and more recently fulfilled its two-millionth order.

About the EY Entrepreneur of the Year Awards

Founded by Ernst & Young LLP, the Entrepreneur of the Year Award is a national contest that divides the United States into 21 different regions and honors leading entrepreneurs inspiring innovation and fueling growth within each of these areas of the country. Since 1986, EY has brought together the business community in the spring to honor regional semifinalists, finalists, and winners who have helped create, build, and guide market-leading businesses. The tireless efforts and visionary foresight of these individual leaders have helped elevate the standard of excellence, transform industries, and create jobs.

Each year an independent judging panel consisting of previous award winners, leading CEOs, investors, and regional business leaders gather to consider the nominations of countless entrepreneurs from across the country. Previous winners of this prestigious award in the United States include the likes of Howard Schultz (Starbucks), Pierre Omidyar (eBay), Hamdi Ulukaya (Chobani), and Kendra Scott (Kendra Scott LLC).

Join Us in Saying Congratulations

JM Bullion is proud of the accomplishments of our very own Michael Wittmeyer. Every day, the staff at JM Bullion experience firsthand the dedication and determination that Michael displays in leading the company as it continues to grow. We wish him good luck come November at the national awards ceremony!