Invest in New Silver Series from Perth with the Australian Wombat

The Perth Mint continues to add to its impressive catalog of silver bullion coins feature animal species native to the Australian continent. The pace of introduction for new designs has picked up in recent years, with introductions of coin collections such as the Emu and Quokka now joined by another of the continent’s marsupials: the wombat. With the release of the new Australian Silver Wombat, those looking to invest in silver from other Perth Mint bullion collections have yet another option. This week’s blog takes a peek at the new Silver Wombat release. 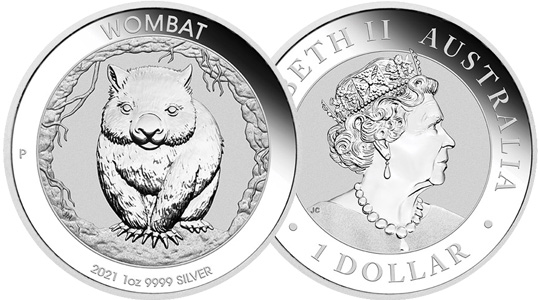 On the reverse side of the new 2021 1 oz Australian Silver Wombat Coin is a depiction of the chunky marsupial. The wombat species is short-legged and muscular, with powerful front claws and sharp teeth that it uses for one primary reason: tunneling. In this clever design from the Perth Mint, you can see the wombat sitting on all fours inside a burrow it has dug underground. The seemingly-lovable creature is depicted looking right at the viewer as roots and vines from shrubs above ground have been gnawed through and moved aside as the wombat extends its tunnel complex.

The obverse face of 2021 Australian Silver Wombat Coins comes with the popular sixth-generation Australian effigy of Queen Elizabeth II. Her Majesty is recognized as the monarch of Australia and holds the title as Queen of Australia as the nation is a member of the Commonwealth of Nations. This right-profile bust of Elizabeth II debuted on Australian coins starting in 2018 and represents the sixth different effigy used during her nearly 60-year reign. The depiction shows the Queen wearing the George IV State Diadem Crown, a ceremonial crown worn on the way to the State Opening of Parliament. This design was created for the Royal Mint in 2015 by Jody Clark and adapted for use on Australian coins three years later.

As the latest silver bullion coin from the Perth Mint, the Australian Silver Wombat is available in Brilliant Uncirculated condition for investors. Individual coins will arrive inside of a protective plastic capsules. Multiples typically ship in sealed rolls of 20 coins or boxes of 100 coins. The box will have a total of five sealed rolls inside. Each coin in this release has 1 Troy oz of .9999 pure silver content and a face value of $1 (AUD). The design is limited to a mintage of only 25,000 coins.

Though the wombat is not considered vermin the eyes of most Australians, an original classification by European outsiders as a rodent caused many colonists of Australia to target the wombat for hunting and removal from colonized lands on the continent. To this day, farmers in Australia still view the wombat as a nuisance because of its burrowing activities that can prove particularly devastating on farmland.

If you’re looking for new Perth Mint silver to invest in, the Silver Wombat is a great choice in 2021! Please feel free to reach out to JM Bullion with your questions at 800-276-6508. You can also chat with us live online or simply send us an email with your inquiries. Don’t forget to follow us on Facebook and check our weekly blog posts for more information on some of our latest releases.