If You Could Use Some Luck, the Canadian Lucky Dragon Has It

Every culture around the world has its symbols of luck and good fortune. Chinese culture is no different and mints around the world have capitalized on the popularity of lunar designs in creating silver bullion programs for numismatists and investors alike. Introduced in 2017, the Chinese Lucky Dragon design from the Royal Canadian Mint is one such example. The latest issue bears a 2019 date mark with the same impressive design for those investors looking for other RCM silver coins. Below you can learn more about the Canadian Lucky Dragon design in this week’s JM Bullion blog. 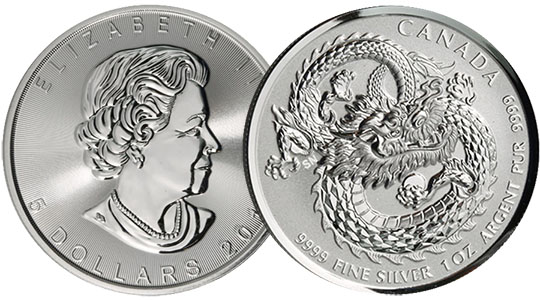 On the reverse side of the 2019 1 oz Canadian Lucky Dragon High Relief Silver Coin is the image of the vaunted Chinese dragon. The single-most important animal symbol in Chinese culture, this unique image of the Chinese dragon combines two symbols of luck and good fortune into one design. On this side of the coin, you will find a slithering Chinese dragon with its long body coiled up in the shape of an eight, a lucky number in Chinese culture. The dragon clutches a pearl in one of its forepaws that you can see the lower-half of its figure-eight body shape. Inscriptions identify the nation of issue, metal content, weight, and purity. You can also see the initials of Simon Ng, the designer of the reverse imagery for this coin.

The obverse side of the 2019 Canadian Lucky Dragon High Relief Silver Coins includes a depiction of Queen Elizabeth II. Her Majesty has featured on Canadian coins since her reign began back in 1952. As of 2003, the same effigy of the Queen has appeared on Canadian currency. This right-profile bust of the Queen was developed in 2003 by Susanna Blunt. Ms. Blunt is just the second Canadian artist ever to design a monarch’s bust of national currency. Her right-profile image of Elizabeth II is the first during the Queen’s reign to lack a crown on the monarch’s head. The coin has inscriptions of the date of issue, face value, and the name of the Queen. The background field of the coin boasts a series of radial lines.

Details of the 2019 Release

The 2019 1 oz Canadian Lucky Dragon Silver Coins are available with 1 Troy oz of .9999 pure silver and the coins arrive in Brilliant Uncirculated condition. Coins in this release will ship individually inside of protective plastic flips or inside of mint tubes of 25 coins. The face value of the coin is set at $5 (CAD) backed by the federal government of Canada. The most defining aspect of the coin may be its high-relief strike. A high-relief coin is struck multiple times with the die during coining with intense pressure. The goal is to create greater visual depth for the design elements of the coin.

The shape of the dragon’s body on the reverse of these  is no mistake. The number eight is considered the luckiest number in Chinese culture. The origins behind this association are many, but most point to the sound of the word for eight in Mandarin. Spoken as “Ba,” it is very similar to “Fa” by sound. The word “Fa” means fortune. As such, the number eight has become closely associated with prosperity, success, and high social status. The number eight is also considered lucky on a broader basis as even numbers are seen as more auspicious than odd numbers. As such, gifts are given in even numbers for all celebrations. During the Chinese Lunar New Year, gifts of money are common and often given in denominations of eight.

Increase Your Luck with JM Bullion

2019 Canadian Lucky Dragon Coins are now available from JM Bullion. If you have any questions about these new coins, please contact our customer service team. We are available on the phone at 800-276-6508, online using our live chat, and via our email address. Don’t forget to check our blog each week and follow us on Facebook.