Horus Joins the Egyptian Gods Series as the 7th Character 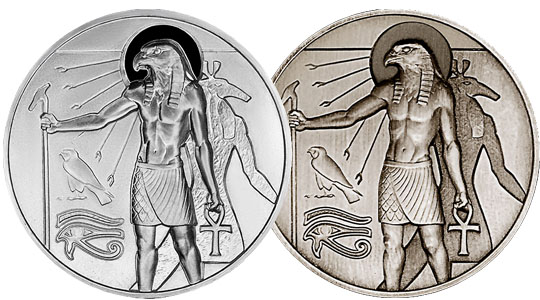 The obverse side of both the 2 oz Horus Silver Round and the 2 oz Antique Horus Silver Round features Horus’ figure as popularly captured in ancient Egyptian art. When depicted in works of art and statues, Horus is shown as a muscular male figure with the head of a falcon. He stands here in left-profile relief with his right hand clutching a staff as he holds onto the Ankh symbol in his left hand, a symbol that represents the concept of eternal life. In the lower-left field, the round design element displays a falcon, the hieroglyphic representation of Hours, as well as the Eye of Horus. In the background, the 2 oz Horus Rounds offer a unique addition that showcases the silhouette of another deity. In this case, Horus’ opposing god, Set, is featured in the background.

As with previous releases in the series, the reverse field of the 2 oz Horus Silver Round and 2 oz Antique Horus Silver Round features a pyramid in the background. In the foreground, a falcon wearing the pschent crown is shown in right-profile relief with a cobra beneath. The inclusion of the cobra is important as many depictions of Horus from Egyptian records include a crown with a cobra representative of the pharaohs.

JM Bullion is pleased to once again offer the 2 oz silver rounds in the Egyptian Gods Series with high-relief visuals in a BU version and an Antique version. Both rounds are initially offered with protective plastic flips for individual specimens and tubes of 10 rounds. Both feature high-relief visuals that include impressive 3D relief on the design elements and a background field with enhanced visual depth. The Antique Horus Round has a polished finish that gives the round the appearance of a silver piece that is hundreds, if not thousands, of years old.

Horus served many purposes in Egyptian religion and mythology, but arguably the most important was that of the God of Kingship. He was closely associated with the pharaohs in life, with his father Osiris associated with the pharaohs in death. In fact, Horus is a major player in the Osiris myth, one of ancient Egypt’s most important myths. The god known as Set killed Osiris, his brother, and dismembered him. Osiris’ wife, Isis, collected his body parts and revived him just long enough to conceive a son, Horus. Set had killed Osiris to assume power, but Horus would eventually engage in an extended conflict with Set that would cost Horus one of his eyes. However, his eyesight was restored by another god and resulted in the development of the popular symbol known as the Eye of Horus.

Now is the time to get your Egyptian Gods Horus Silver Round. This is the seventh release overall in the series, and like previous releases, it will only be available for a limited period of time until the next design goes into development. JM Bullion customer service is available to assist you at 800-276-6508, online using our live chat, and via our email address. Remember to keep checking our blog each week for more updates and details, and follow us on Facebook.