Honoring The Brave with a New GSM Silver Round

The Golden State Mint is a private American mint with a history of producing silver, gold, and copper collections representing a wide range of themes. From historic US coin designs to one-of-a-kind imagery, it is not uncommon for the Golden State Mint to also produce designs honoring the US Military. One of its most recent designs honors the sacrifices of Americans from the founding of the nation to the present day. Before you buy the new Home of the Free Silver Round, learn a little more about its background. 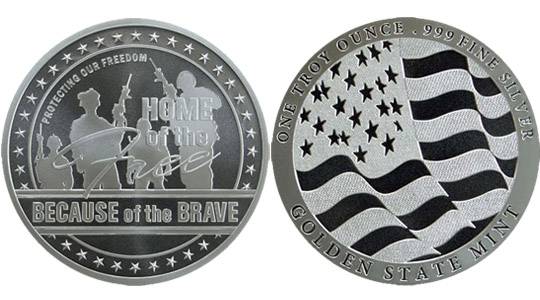 On the obverse side of the 1 oz GSM Home of the Free Silver Round is a design that honors the bravery and sacrifices of the members of the United States Military. The design features the silhouettes of four American soldiers. The soldiers in full battle gear with weapons at the ready to defend themselves, the Constitution, and freedom itself. The design rim features American stars and there are several inscriptions. The most important of these is the phrase “Home of the Free Because of the Brave.” The word “Free” is the only one engraved in a free-hand, script text.

The Red, White, and Blue

The reverse face of GSM Home of the Free Silver Rounds comes with a design that the Golden State Mint has featured on various Americana-themed releases. Here, the American flag is featured as if it were flapping in the breeze. Amidst the folds of the flag as its flaps in the wind, you can see the 13 stripes that, in its original design, alternate between white and red. These stripes represent the original British North American colonies that pushed back against the greatest military in the world to fight an uphill battle for freedom and Democratic rule. You will also see the field in the upper-left with its 50 stars, one for each of the modern US states in the Union.

Details on the Release

Each one of the 1 oz GSM Home of the Free Rounds offered in this release comes with 1 Troy oz of .999 pure silver content. These Brilliant Uncirculated silver rounds are available individually inside plastic flips or in plastic tubes of 20 rounds.

History of “Land of the Free, Because of the Brave”

The first reference to America as the “Land of the Free and Home of the Brave” came during the War of 1812. Francis Scott Key wrote the lyrics to a song that became known as the Star-Spangled Banner as he witnessed the British Naval barrage on Fort McHenry in Baltimore Harbor. In recent years, a variation on the phrase “Land of the Free, Because of the Brave” has come into popular use in the United States. The phrase honors the longstanding sacrifices and continued bravery of generations of Americans in defending the United States Constitution and the freedoms of millions around the world. From a fight to establish and preserve their own freedom during the Revolutionary War and the War of 1812 to sacrificing for the freedoms of others in World War I, World War II, and the Korean War, millions of Americans have stepped into the line of fire to ensure that freedom will always ring.

Background on the Golden State Mint

The Golden State Mint has been in business since 1974. The mint is a family-owned and operated facility that not only replicates some of America’s most beloved coin designs but also creates its own distinctive designs for collections such as its Americana-themed rounds. The mint is located in Central Florida and uses state-of-the-art production to create a wide range of gold, silver, and copper rounds with very little waste.

The all-new Home of the Free Because of the Brave Silver Round is now available to you at JM Bullion. If you have any questions, please feel free to reach out to us. You can call us on the phone at 800-276-6508, chat with us live online, or send us an email with your inquiries. We encourage you to follow us on Facebook and keep up to date with our latest releases by reading our detailed weekly blog posts.