Guess Who? A New Design Arrives in the Music Legends Series

The fourth installment of the British Music Legends Series from the Royal Mint has arrived. In the second 2021-dated coin release, the Royal Mint honors another of England’s biggest rock bands: The Who. With a track record of success that dates back to the group’s founding in 1964, The Who have dazzled music lovers and concertgoers for nearly six decades. Though the group still performs today without some of its original members, The Who still has a way of captivating audiences with its performances. JM Bullion now has the fourth design in the British Music Legends Series available to investors while supplies last. 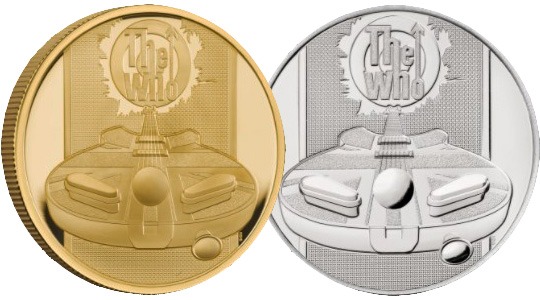 For all coins issued by the Royal Mint in the new British Music Legends The Who release, the reverse field bears the same design element. Here, you will find an electric guitar in the foreground that has been thrown through an amplifier. As it gets closer to the viewer, you can see that the body of the guitar is covered by the Union Jack flag of the United Kingdom. Beyond the hole in the amplifier, you will find the iconic name logo for the group, as well as its mod roundel. This visual is found on the reverse of both the 2021 British Music Legends The Who Silver Coin and the 2021 British Music Legends The Who Gold Coin. Within the design field, the outer rim has an inscription identifying the date, weight, metal content, and purity of the coin, with the inscriptions matching the appropriate details of the respective silver and gold coins.

The obverse side of all coins in the British Music Legends Series features the fifth-generation portrait of Queen Elizabeth II. Her Majesty is shown on this side of the coins in right-profile relief in a design created in 2015 by Jody Clark. At just 33 years old, at the time, Mr. Clark was the youngest artist ever to create a monarch portrait for the Royal Mint of England. This portrait shows the Queen at the age of 89 with the George IV State Diadem Crown. The background field has a guilloche design element common on all British bullion coins and boasts inscriptions identifying the face value, nation of issue, and the monarch.

Although the Royal Mint offers a wide range of proof, clad, and Brilliant Uncirculated coins in the British Music Legends Series, we’re specifically focusing on the investment-grade BU coins in this post. Both the 1 oz silver and 1 oz gold coins in the British Music Legends The Who release are offered in Brilliant Uncirculated condition. The 1 oz silver coins come with a limited mintage of 25,000 coins, 1 Troy oz of .999 pure silver, a face value of 2 Pound sterling, and ship individually or in bulk. Single silver coins come in protective capsules, while multiple are offered in rolls of 20 or boxes of 100 coins. Now is your best chance to get the silver coin with JM Bullion as the silver specimens in all four release are already sold out at the Royal Mint.

For the 1 oz gold coin, the details of the release differ from the 1 oz silver coin. The 1 oz gold coins have 1 Troy oz of .9999 pure gold content, a face value of 100 Pound sterling, and a limited mintage of 2,500. The gold coins in the series are offered only with protective acrylic capsules.

Brief History of The Who

The Who formed in London in 1964. Over the course of the group’s history, the lineup of performers has changed as some of the original members died and others retired from performing. The original members of the band consist of Roger Daltrey, Pete Townshend, John Entwistle, and Keith Moon. The first change in the group’s performing lineup came in 1978 just after the release of Who Are You when Keith Moon died.

Invest in the British Music Legends Series with JM Bullion

With the silver coins in this series already sold out at the mint and the gold coins equally popular with buyers, there’s no time to waste in getting your British Music Legends The Who coins. Please contact JM Bullion with any questions at 800-276-6508, chat with us live online, or email us directly. Don’t forget, our weekly blogs are a great resource for in-depth information on releases and we are also available to follow on Facebook.