It’s been more than 20 years since the first Harry Potter novel hit bookshelves, but that doesn’t mean that interest in the wizarding world has diminished in the least. The doors to Hogwarts School of Witchcraft and Wizardry might now be closed to those of us in the real world, but you can still let your imagination run with thanks to a new series of silver bullion products available in 2020. The Harry Potter Silver Series consists of eight colorized silver bullion coins depicting the major characters from the feature-film franchise and an impressive colorized silver foil collection with the crests of each of the four houses from Hogwarts. Now’s your chance to relive the excitement of the series with beautiful numismatic items. 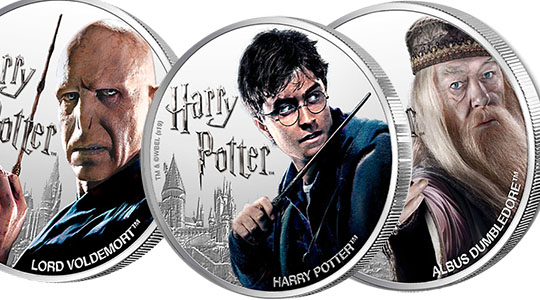 First up is an eight-coin series of 1 oz silver issued on behalf of the Reserve Bank of Fiji. The collection boasts a shared common obverse field with a different character portrait on the reverse of each individual coin release. The coins in this release series have a limited mintage of just 2,000 coins per character design. Each one has 1 Troy oz of .999 pure silver and is a proof specimen with hints of frosted designs and mirrored background fields.

Everything about the individual releases in this collection is impressive, all the way down to the packaging and the Certificate of Authenticity. The coins are housed individually inside of a presentation box that ships with a Harry Potter-themed shipper. The individual shippers have colorized photos depicting the character represented in that release. The Certificate of Authenticity is a 2 Gram silver foil with its own .999 pure silver content.

The obverse field of each coin has the Fijian Coat of Arms displayed in the center. The national crest is a quartered shield with native flora and fauna depicted in each quadrant. At the top of the shield is a lion in a passant guardant pose and there is a Polynesian canoe above the shield. On either side, the shield is supported by native Fijians. Inscriptions on this face include “Fiji 2020,” “1 oz .999 Fine Silver,” and “1 Dollar.”

For the reverse design field, each coin offers its own distinctive view of the Hogwarts School of Witchcraft and Wizardry in the background field. The stylized wording “Harry Potter” is featured in the background with a colorized image of one of the eight main characters from the film franchise in the foreground wielding a wand in a scene from the movies. The characters represented in the collection include:

Currently, this limited-edition collection is on pre-sale from JM Bullion. The coins are expected to be available for shipping on or around February 14, 2020, but you don’t have to wait to make your move. Any purchase you make now will ship as soon as the coins are in stock in our warehouse.

In the opening scenes at Hogwarts School of Witchcraft and Wizardry when Harry, Ron, Hermione, and the other first-year students arrive for their first dinner at the castle, no one can sit until they know which house they’ll be joining as residents for the next several years. In order to find out which house the students belong to, they must put on the sorting hat and allow it to peer into their souls to analyze their personality and characteristics to determine which of the four houses at Hogwarts best suits them.

The four houses are depicted in a Hogwarts House Silver Foil release that offers colorized depictions of each of the house crests. Each silver foil contains 5 Grams, or .1607 Troy oz, of .999 pure silver and is housed inside of an individual protective capsule. The clear capsule allows you to view the designs on both faces of the foil, including the colorized house crest on the reverse.

Individual silver foils in this release are legal tender for the nation of Niue with a face value of $1 (NZD) and a limited mintage of just 10,000 silver foils per design. The obverse of each silver foil has the right-profile portrait of Queen Elizabeth II created in 1998 by Ian Rank-Broadley. The reverse of the silver foils includes one of the following four designs:

The Hogwarts House Silver Foils are ready for purchase today from JM Bullion and ship with a presentation box that replicates the particular house crest from the product you purchase.

Pick a Side and Show Off Your Allegiance

If you have any questions, you can always contact JM Bullion customer service at 800-276-6508. We are also available online through our live chat and email address features. Don’t forget to visit our blog each week for new posts on exciting product releases and make sure you follow us on Facebook for daily updates and the chance to win silver and gold in our spot price guessing games.