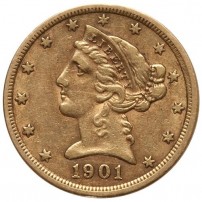 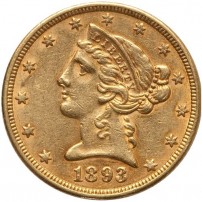 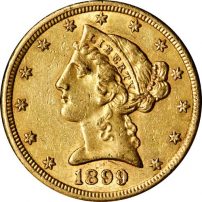 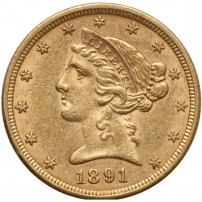 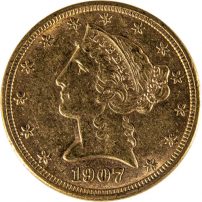 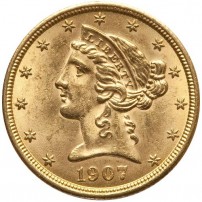 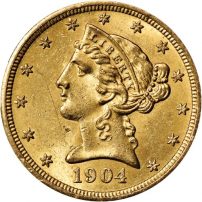 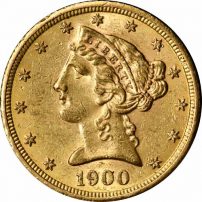 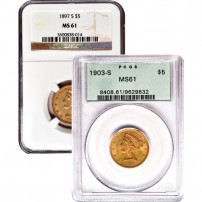 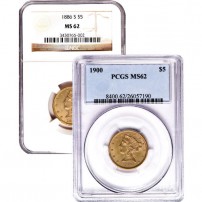 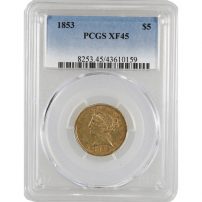 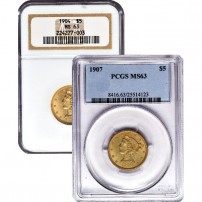 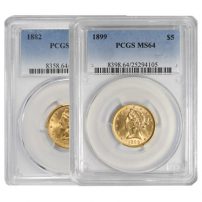 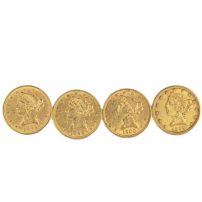 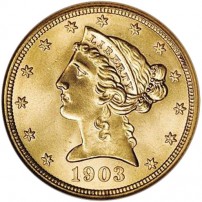 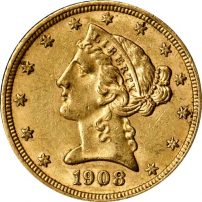 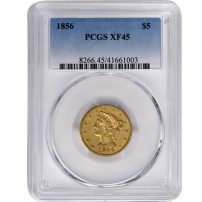 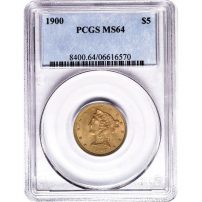 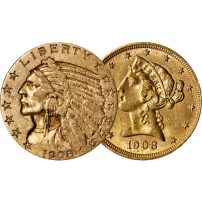 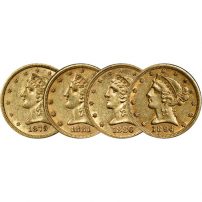 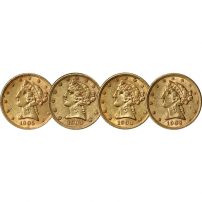 It doesn’t take much digging for one to determine that the Liberty Head design is one of the perennial favorites stemming from the US Mint. The $5 Liberty Gold Eagle was first produced shortly before the California gold rush of the 1840s but remained in continuous production until 1908 when it was replaced by the $5 Indian Gold Half Eagle Coin. When it was first produced, the coin’s $5 face value was about in line with the coin’s approximate worth in gold, but now the coin is worth far more than its $5 face value leads you to believe. With its high gold content and extreme value as a collector’s item, it is no wonder these coins are so popular both in the United States and abroad.

The design of the $5 Liberty Gold Eagle was the work of Christian Gobrecht, who heavily relied upon the neoclassicist style of art that was so popular in the early 19th century. The coin’s obverse depicts a leftward looking Lady Liberty. The elegant Lady is adorned with a coronet featuring a “Liberty” inscription atop her beautifully curled hair. The outer edges of the coin are marked by 13 stars which represent the 13 original colonies of the US. Towards the bottom of the coin’s obverse is an inscription of the year in which the coin was minted.

The coin’s reverse is dominated by an American eagle with its wings spread wide as if it were about to take off. In the eagle’s talons are both an olive branch and cluster of arrows; the eagle also has a shield across its chest as is typical of designs which draw inspiration from the Great Seal of the United States. Above the eagle is a banner which reads “In God We Trust.” Finally, along the outer edges of the coin’s reverse, there is an inscription which reads “United States of America,” as well as the $5 face value.

The Liberty Head’s introduction in 1839 also marked the first year in which the Half Eagle contained no silver. Up until that point, there were, in addition to gold, both silver and copper in each Half Eagle coin. The coin was now minted with 90% gold and 10% copper. Finally, the Liberty Head is special due to it being the only US coin produced at 7 different mint facilities (Philadelphia, Dahlonega, Charlotte, New Orleans, San Francisco, Carson City, and Denver).

The $5 Liberty Gold Eagle has been off the production lines for more than a century now, but its popularity still persists. Its high gold content makes it a great investment vehicle, while its rarity makes it equally sought after by collectors who are looking to add a unique coin to their collection. Seeing as there are no new $5 Liberty Gold Eagles making their way to the market anytime soon, investors and collectors only have a limited amount of time to get their hands on these coins.

As always, all certified coins from JM Bullion will be shipped in their certified protective slabs while all cleaned coins will shipped protected by a vinyl coin flip. Every shipment will be dispatched fully insured in discreet packaging.