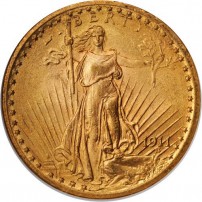 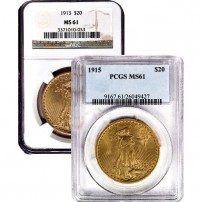 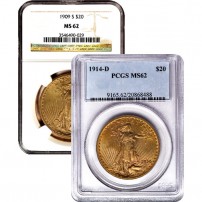 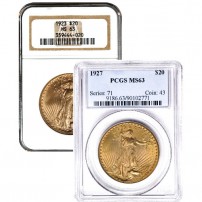 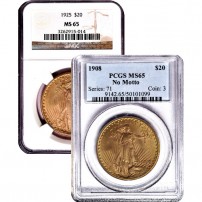 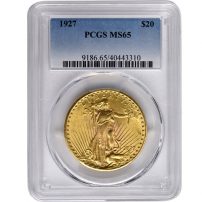 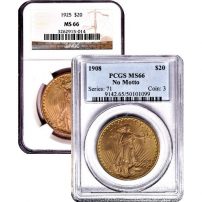 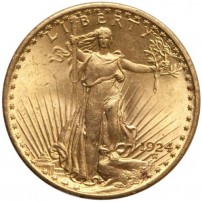 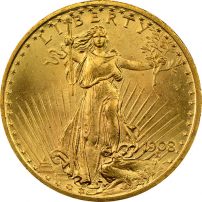 $20 Saint Gaudens Gold Double Eagle Coin “No Motto” AU
As Low As:
Out of Stock 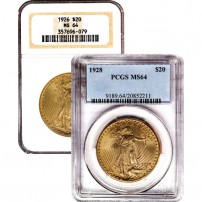 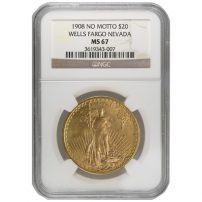 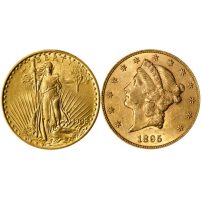 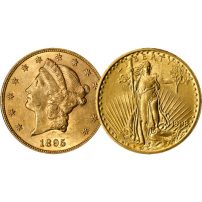 The Saint Gaudens design was created in 1907 for use on $20 US gold coins and would come to be known as the double eagle. The coins were only produced until 1933, but during their short time in circulation they would prove to be a public favorite. Originally designed by Augustus Saint-Gaudens, a US Mint sculptor, the images depicted on the coin have been applied to numerous other coins produced by the mint. Such notable coins include the American Gold Eagle.

Saint-Gaudens Gold Double Eagles are rare and beautiful coins. With a storied past, these coins allow buyers to hold an important piece of history right in their hands. Investors and collectors alike can appreciate the importance of this coin. If you’re looking for a striking addition to your collection that’s as stunning as it is valuable, this is an ideal choice.

What Is A Double Eagle

A double eagle is simply a U.S. coin worth $20. Our nation's first double eagle gold coin was the $20 Liberty Gold coin, which was introduced in 1850. The Saint-Gaudens gold double eagle was designed by the famous sculptor Augustus Saint-Gaudens, hence its name. President Theodore Roosevelt commissioned the design in the early 1900s, seeking to beautify United States coinage, which he found particularly displeasing. Prior to this, U.S. coins were designed exclusively by Mint employees.

The Saint-Gaudens Gold Double Eagle was produced exclusively by the U.S. mint from 1907 to 1916, when minting ceased due to rising gold bullion prices in conjunction with World War I. Coinage resumed in 1920 and continued until 1933. Though an estimated 25,000 double eagles were minted in 1933, these coins were returned to the treasury and melted down into bullion, in accordance with currency laws of the Great Depression which removed gold coins from circulation.

However, several 1933 specimens escaped. Most were confiscated by the U.S. Secret Service. One coin was legalized and sold at auction for $6.6 million. With the additional 15 percent buyer’s fee, the total price for this coin was $7,590,000, making it the world’s highest priced coin.

Seeking to mimic the beauty of ancient Greek coinage, Roosevelt requested an elegant high relief design with a high rim for the double eagle. Saint-Gaudens agreed with this suggestion and proceeded to create what would be the first of several versions of this design. The original was in such high relief that only 24 pieces were struck, each requiring nine strokes of the metal press to create a single coin. These rare 1907 coins are known as “ultra high relief” or “extra high relief” pieces.

Later that year, about 12,000 coins were produced using a second lower relief design. These were still too intricate to cast for circulation, though. These coins are known as “high relief” and each required five strokes of the press.

Finally, an extremely low relief design was created, though the final work was done by mint engraver Charles Barber. Barber also changed the Roman numeral year to Arabic numerals. Though the low relief design drastically changed some of the finer details present in this piece, the difference is only notable when comparing the different reliefs side-by-side.

The Saint-Gaudens Gold Double Eagle is considered by many to be the most beautiful coin of all time. The obverse features Liberty striding forward. She holds a torch in her right hand and an olive branch in her left. The Capitol building is visible behind her. Coins minted from 1907 to 1911 feature 46 stars, representing the number of states at that time. Coins minted from 1912 to 1933 feature 48 stars around the border. The reserve side features an eagle in flight with rays of sun behind it.

Investors appreciate the value of the Saint-Gaudens Gold Double Eagle for several reasons. Its obvious beauty creates great appeal. This gold coin is also a valuable investment in its own right, containing approximately 90 percent gold. Finally, the rarity of the piece makes it a popular choice for those who want a collection that’s beautiful and historical.

The original 1907 Saint-Gaudens Gold Double Eagle did not feature the motto “In God We Trust.” However, public outcry resulted in a later design that did include this phrase. The 1908 mints of this coin are available both with and without the motto. A second variation occurred the following year when a slight over-date appeared on about 161,000 coins, so that a light eight showed beneath the nine in the year 1909.

In rare cases, collectors may find some of the high relief and ultra high relief coins available on the market.

All Saint-Gaudens Gold Double Eagle coins are generally collectible and valuable. Since the last coins were minted in 1933, and were withheld from circulation, every piece is a historical collector’s item. Coins from 1929 and beyond are particularly rare. Though the double eagle was minted in and after 1929, very few of these were released into circulation. Most were held in Treasury vaults, only to be melted down a few years later.

The stunning Saint-Gaudens Gold Double Eagle is a worthwhile investment for its gold content, historical significance, and sheer beauty. JM Bullion is excited to be offering several variations of these Gold Double Eagles in both certified and raw form and from cleaned to mint-state coins. Be sure to look over our gallery and take advantage of free shipping on every order.