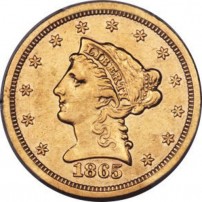 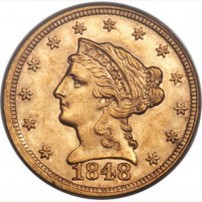 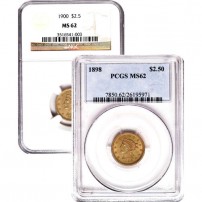 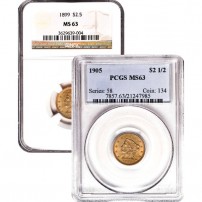 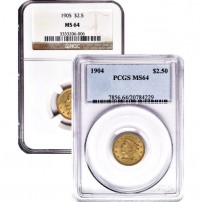 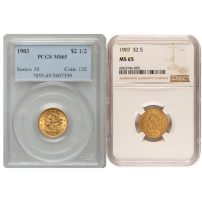 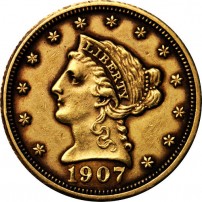 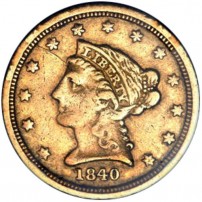 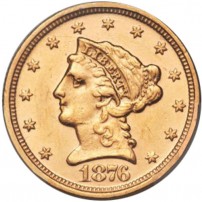 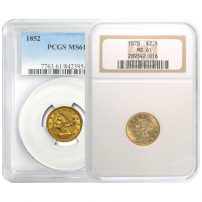 The $2.5 Liberty Head Gold Quarter Eagle coin is yet another beautifully designed product of the US Mint. Like most US Mint coins, the fact that it hasn’t been minted for more than a century only makes it more valuable in the eyes of both collectors and investors. Its high gold content in conjunction with it being increasingly difficult to find makes it easy for one to understand why these coins, when in stock, tend to only be available for a limited time. The $2.5 Liberty Head is inarguably a piece of American history, but they are sought after by investors and collectors the world over.

Christian Gobrecht is credited with designing the $2.5 Liberty Head Gold Eagle, which began production in 1840. The coin’s obverse depicts a left-facing bust of Lady Liberty with her hair curled and a coronet atop her head. The coronet is inscribed with the word “Liberty” while 13 stars line the outer edge of the coin. Finally, the year in which the coin was minted is inscribed below the image of Lady Liberty.

The reverse side of the coin is dominated by a heraldic American eagle, reminiscent of the Great Seal of the United States. The eagle has a shield across his chest and is clutching an olive branch and three arrows in its talons. The $2.5 face value is listed towards the bottom of the coin while the words “United States of America” are encircling the eagle’s image. For how dated the coin is, its design features intricacies that most would not expect.

The $2.5 Quarter Eagle gold coin was minted by the US as a byproduct of the Coinage Act of 1792. It was officially introduced in the early 1800s and was continuously produced up until the early 20th century. The Liberty Head design was first introduced in 1840 and was minted for more than 65 consecutive years until it was replaced by the $2.5 Indian Gold Quarter Eagle in 1908.

As opposed to the earlier Classic Head Quarter Eagle coin edition, the Liberty Head featured an immense amount of detail and precision within its design. The image of Lady Liberty stuck out more on the Liberty Head and was generally a better, more widely accepted coin than its predecessor. The value of these coins remains more or less constant from design year to design year, with the exception of one edition. Some 1848 $2.5 Liberty Head Gold Eagles were minted in California and bear a special “CAL” marking. These coins are incredibly difficult to find and often run for a high price.

The $2.5 Liberty Head Gold Eagle was last minted in 1907, but is still one of the hottest selling products from the US Mint. These coins are becoming increasingly difficult to find which means that, the second they go on sale, they immediately draw massive attention. Because of their 90% gold content, these coins are great for investors. In all reality, the gold content of these coins is only slightly less than that of US Mint coins currently being produced. Because of their rarity, however, they are equally as sought after by collectors who are looking to add a beautiful piece of history to their collection.