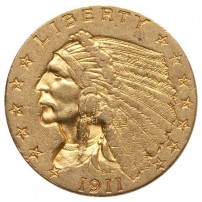 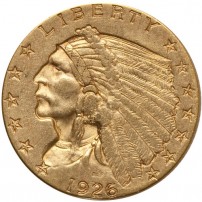 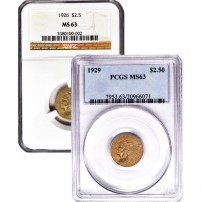 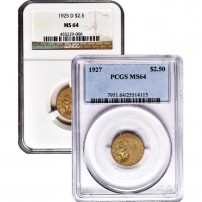 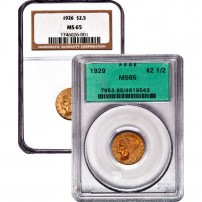 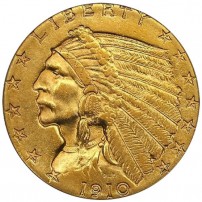 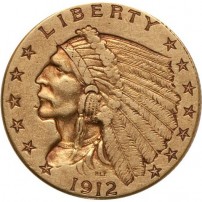 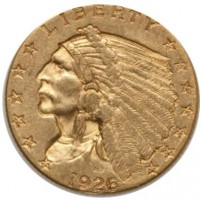 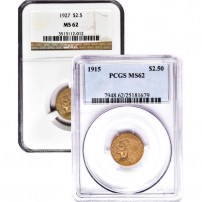 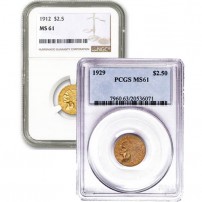 The $2.5 Indian Head Gold Eagle is perhaps the most sought after Quarter Eagle gold coin to ever be produced by the US Mint. Its unique design and the different minting techniques used to create this coin make it a spectacle to behold, especially for those interested in 19th and early 20th century US coins. The US Mint has produced a large number of gold coins throughout its storied existence, but few are more popular than the Indian Head design. Coins produced nearly a century ago are almost always going to have some element of rarity, but these coins also boast extremely high gold content capable of catching the attention of investors who want to put their money into something a bit more off the beaten path of coins produced nowadays.

The coin’s obverse depicts a proud Native American chief in full tribal garb, including a distinctive headdress. Above the Native American’s image is the incused inscription of the word “Liberty” while the year in which the coin was minted is listed below the obverse’s image. 13 stars comprise the remaining space on the outer edges of the obverse side of the coin.

The coin’s reverse depicts a regally perched American eagle so detailed that you are able to see the ruffles in its individual feathers. A number of incused inscriptions surround the eagle, including “United States of America”, “E Pluribus Unum”, “In God We Trust”, and the $2.5 face value.

The History of the $2.5 Indian Head Gold Eagle is more accurately summed up as part of the wider history of the Quarter Eagle US Gold coin. The $2.5 face value coin was first sanctioned as part of the US Coinage Act of 1792, one of the earliest such acts in US history. The Quarter Eagle itself was not minted until the early 1800s, but the second it hit the production lines it was an immediate crowd favorite.

Varying designs of the Quarter Eagle were used throughout the duration of the 19th century, but it wasn’t until 1908 when the Indian Head design was introduced. As opposed to previous editions which featured the image of Lady Liberty on the obverse, this new coin depicted and celebrated the culture of Native Americans. The new design coupled with the incused engravings were enough to solidify this coin design as being one of the most popular to have ever come from the US Mint to date.

Of all Quarter Eagle editions produced by the US Mint, the Indian Head is the most recent as it was pulled from production in 1929. Still, the coin has been out of circulation for more than 80 years and has retained the same popularity and, in many ways, has become even more popular among both collectors and investors. As the days, weeks, and years wear on, however, these coins only grow increasingly rare and, thus, more difficult to find. For this reason, many investors and collectors do not hesitate when they are graced with the opportunity to snatch up a few of these historic coins.

With regard to all cleaned $2.5 Indian Head Gold Eagles, they will be placed in a vinyl coin flip as to protect them during shipping. All certified coins will be shipped in their certified slabs and, as always, all shipments over $199 will be insured for free of charge.