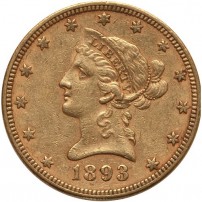 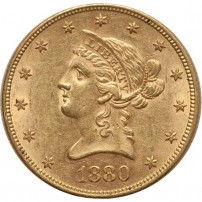 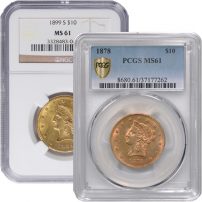 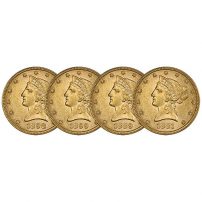 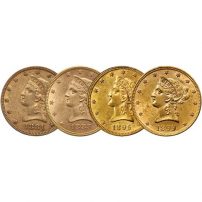 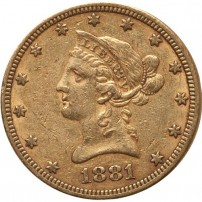 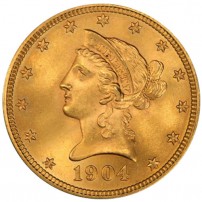 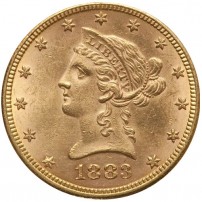 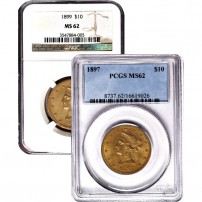 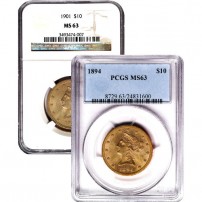 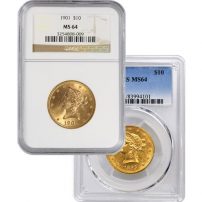 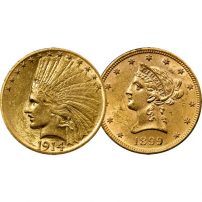 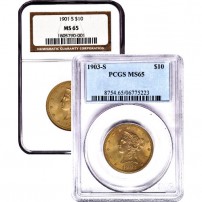 The US Mint has long produced some of the most sought after gold coins in the world. In fact, when they were producing gold coins throughout much of the mid-19th century, few other mints were doing the same. Of the many gold coins produced during that era, the $10 Liberty Head Gold Eagle is one of the perennial favorites. This coin boasts an extremely high level of purity, so much so that it is still just as valuable as an investment vehicle as it is a collector’s item. The rarity of these coins increases daily, so there is no sense in waiting to get your hands on these beautifully crafted US Mint Pre-1933 coins.

Christian Gobrecht’s famous Liberty Head design is found on a number of coins produced by the US Mint around the same time of the California Gold Rush. The coin’s obverse features the profile image of Lady Liberty, her hair loosely curled and adorned with an elegant coronet. The Lady’s coronet is inscribed with the word “Liberty” while 13 stars, said to represent the 13 original US colonies, line the outer edge of the coin’s obverse. The year in which the coin was minted is indicated underneath the image of Lady Liberty.

The coin’s reverse is a derivative of the Great Seal of the United States. It depicts an American eagle clutching both an olive branch and arrows in its talon and sporting a shield across its chest. Above the eagle is a banner which reads “In God We Trust.” The outer edges of the reverse side lay claim to a “United States of America” inscription as well as the $10 face value.

Like so many gold coins produced by the US Mint, the $10 Liberty Head Gold Eagle came as a result of the Coinage Act of 1792. Despite this, the first $10 Liberty was not minted until 1838. Shortly after it was minted it became clear that this particular coin was a favorite of the American public; it clearly still is.

The coin retained more or less the same design for a majority of its being minted, though in 1866 the banner above the eagle’s head reading, “In God We Trust” was added due to popular demand in the wake of the American Civil War. This was a key addition to the coin and is one that can still be found on American currency today. The coin was eventually replaced in 1907, however, with the introduction of the $10 Indian Head Gold Eagle.

The last $10 Liberty Head Gold Eagle may have made its way out of a US Mint facility for the last time more than 100 years ago, but the coin is still as relevant as ever. Its high (90%) gold content makes it a rational acquisition for investors while its age and rarity make it something most collectors can’t resist. Regardless of why you are a prospective buyer of this coin, the one thing needed to be understood is that these coins are not getting any less rare. With such limited quantities available, and quantities growing more limited by the day, it should come as no surprise when these coins sell out quickly.

When you purchase our $10 Liberty Head Gold Eagle coins, your package will be shipped for free and will also be insured against damage or loss. All certified coin editions will be dispatched in their certified plastic slabs while all other coins will be carefully placed in a protective vinyl coin flip. If you have any questions about our selection of $10 Liberty Gold Eagles or any other products, feel free to give us a call at 800-276-6508. You can also send us an email, or even take advantage of our live chat feature.