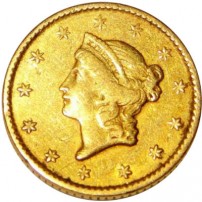 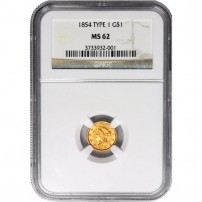 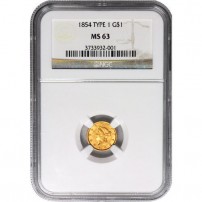 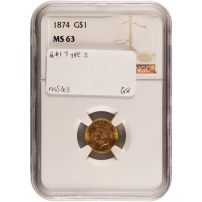 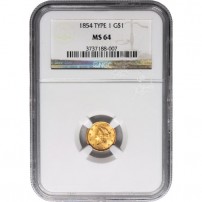 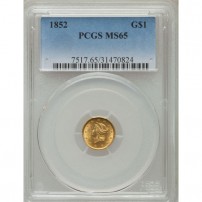 The Liberty Head Gold Type 1 one dollar coin is a rare piece for any collection. This piece is steeped in history, with a minting run that lasted for only five years during one of the most fascinating periods in American history. Though the Type 1 design was soon replaced with an Indian princess, this distinct image of Lady Liberty is an iconic choice that will help to fill out any coin collection or investment portfolio. Add interest and real gold to your collection with certified Type 1 Liberty Gold Dollars.

The Liberty Head Gold coin is a one dollar gold piece produced from 1849 to 1854. This small denomination coin was a direct result of the California Gold Rush. A rapid influx of gold in the United States made the creation of low denomination pieces, such as the $1 coin, possible. At the opposite end of the spectrum was the double eagle, worth $20. This coin was developed during the gold rush, as well.

Though the double eagle survived until 1933, when all gold coins were removed from circulation, the low value $1 and $3 coins lasted only until September 26, 1890 when the production of these coins was halted. The last coin in the series was the type 3 $1 Indian Gold Coin.

Proofs of the liberty gold eagle type 1 coins were struck in Philadelphia. Mintmarked dies from the Philadelphia Mint were also sent to branch mints in Charlotte, Dahlonega, San Francisco, and New Orleans. The Philadelphia mint produced these coins almost continuously, while the other mints produced the $1 coin more infrequently.

History of the Mint

The first Liberty Head Gold Dollar Coins were minted on May 7, 1849. As the gold rush continued to produce an overabundance of this metal, it was suddenly cheaper to produce gold coins than silver. The gold dollar became the only federal coin in circulation with a denomination between the cent and the $2.50 Gold Quarter Eagle. Production for the gold dollar peaked between 1850 and 1853.

In 1853, Congress passed an act to reduce the weight of silver coins, which would effectively bring them back into circulation. Thus, the decline of the gold dollar began.

All coins in the Liberty Head series were designed by James B. Longacre. The front of the coin features Lady Liberty’s head facing left and surrounded by 13 stars to represent the original 13 colonies. Lady Liberty bears a tiara that reads “Liberty.” The back of the $1 coin reads “United States of America” and “1 Dollar.” Instead of the eagle common to other coins, this design features a heraldic wreath, which is one of its most distinctive features.

This small coin was 13 mm in diameter, approximately three-quarters of the size of a dime. A common complaint was that the coin was incredibly easy to lose. These coins contained 90% gold and 10% copper. A single $1 gold coin has 0.04837 ounces of gold.

In 1854, the Type 1 design was replaced with an Indian princess design, which would appear on the Type 2 $1 gold coins.

Investors like the Liberty Head Gold Coin for its rarity and distinct design. This gold coin was in circulation for only five years, during the heady time of the California Gold Rush. It offers the owner an intriguing piece of history. These coins are available in freshly cleaned condition, as well as a number of grades. Graded coins are kept in their PCGS or NGC certified coin slabs, making them easier to keep track of then the raw coins which are small and easy to lose.

The Liberty Head Gold Type 1 Coins are the first incarnation of the $1 coin. There are very few varieties of this coin. Beginning in 1850, these coins featured an “L” on Lady Liberty’s neck, in tribute to the coin’s creator. Those produced in Charlotte did briefly exhibit a unique trait. A few coins were struck with an open wreath design on the back, rather than the more traditional closed wreath image. Only five of the open wreath variety are known to exist. One sold for $690,000 at a 2004 auction.

In total, it’s estimated that 19,499,337 gold dollars were minted. This includes all possible types. Type 2 coins are the rarest, but a very fine Type 1 gold dollar is still very valuable. Savvy investors and collectors can still find many of these coins on the market. The gold dollar coin makes an excellent addition to any coin collection or investment portfolio due to its uniqueness and rarity.

Individuals who want to add value, history, and interest to their collections should consider the unique Liberty Head Gold Type 1 coins. We offer a variety of these coins in Mint State grades which have been certified by the NGC or PCGS, as well as professionally cleaned coins.